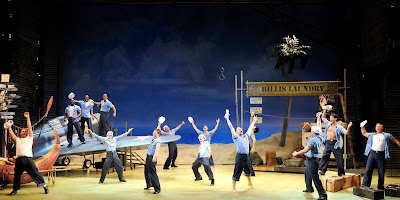 This is the first offering in Broadway Across America’s new season, which has some genuinely thrilling shows in store, most notably In the Heights. But South Pacific, as a perfect extension of Bart Sher’s celebrated production, is the absolute must-see. And you only have through this Sunday, August 8, to catch it, so hurry up. This is one show where it's worth popping for the expensive seats.
Posted by Mead at 8/04/2010 10:08:00 PM

I'd have to say that "South Pacific" remains my all-time favorite musical, so I'm so glad not to be missing this. Glad to hear that you think that the acclaim for this revival is merited. I've got a ticket for the last show Sunday night - can't wait!

It's an excellent production of a musical I never before realized was so amazing. It really testifies to the power of music and how it can be an exponential amplification of human feeling. "I'm in Love with a Wonderful Guy" sounds like falling in love; when someone sings "Some Enchanting Evening" to you, you fall under his spell!

And "Younger than Springtime" just gives me chills! :-)

It was my first live play. My parents took at 5 years old to the touring company with Janet Blair. The sight of the men with their shirts off made quite the life long impression. I think the libretto is 1st rate... & when you think of when it was 1st produced...

I think THIS NEARLY WAS MINE is one of the most beautiful theatre songs of all time.