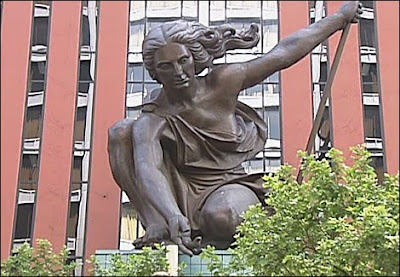 Why do Portlandians refer to Portland as Portlandia? Damned if I know, but I’ve always loved it that our sardonic affection for the soggy city has come up with this moniker — comparable, perhaps, to San Franciscans invariably referring to their home as The City, or even the more ubiquitous SoCal sobriquet of Ellay.

And now you know there’s this new TV series about to air, Portlandia, which may do for Stumptown what The Drew Carey Show did for Cleveland. Whatever that was. Or was it Cincinnati?

That’s another post. I’m just showing up now to note that there’s been an awesome amount of boundary-busting theatrical activity here lately, and there’s about to be a lot more. I hope you caught Chris Harder’s superb solo piece Fishing for My Father recently, where Chris portrayed a kind of po-mo scary clown (of the machismo sort, not the Krusty variety) and turned it into a meditation on what it means to be male and, ultimately, human.

Just as palpably and inexplicably touching is the current production of Will Eno’s Oh, the Humanity, which has one more weekend over at The Church. As deftly navigated by Our Shoes Are Red/The Performance Lab, this is a sweetly tart collection of short Eno pieces that proves what we already knew: he’s the bastard love child of Samuel Beckett and Jon Stewart. Definitely catch this show.

And ever since I found out Portland Playhouse was going to produce Kirsten Newbom’s astonishing play Telethon -- directed by Rose Riordan, no less -- I’ve been itching for it to get here, but we have to wait till October 7 for that hilarious and disturbing sucker punch. But hey, Hand2Mouth’s Uncanny Valley is about to open at Reed, and is likely to be one of the fall’s most exuberant offerings.

That’s saying something, considering that PICA’s internationally lauded festival TBA:10 opens this Thursday. As always, it opens with a bang; Rufus Wainwright headlines an evening of crooning at the Shnitz that is rumored to includes pieces from his opera, Prima Donna. And which will feature some beloved local figures, including Carlos Kalamar, Thomas Lauderdale and Storm Large.

EFF why eye, I’m one of TBA’s blogging fools this year, so visit Urban Honking daily to see how the opening went, as well as all what’s funny, scary and other provocative for those 10 crazy days and nights.
Posted by Mead at 9/07/2010 06:17:00 PM

mead, kind sir, i must protest.

it's new york that is "the city" and not san francisco, no matter what the san franciscans say.

Many years ago when I lived in SF, a Londoner came to visit me. He looked at my sweeping view of the Presidio and the Golden Gate Bridge and said: "Oh, it's like a little seaside resort." I was piqued, because back then SF was the big city to me. But after that came Nueva York, and the rest....is lengthy.

I very much enjoyed your fall preview. Now to wrangle people to come out and see some of these shows!

Hey Krow, perhaps we could go to something together. And I could replace those endless Journey loop tapes with the theme from I Dream of Jeannie.