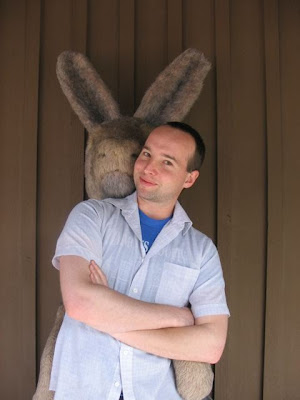 Being a brief interview with the mercurial playwright Jordan Harrison.

Does Portland love you or what? You’ve been in JAW twice, and now both those plays moved into full production at Portland Center Stage. Futura opens there tonight, and CoHo Productions opens Kid-Simple on February 18. Our own Jordan Harrison Festival! Why do you think we’re so drawn to your work here?

I suspect that it’s less to do with me and more to do with Portland. It seems like a theater town that's uncommonly focused on new work. I just went to 99 Ways at Theatre Vertigo, and the posters in the lobby were like a who’s who of the most exciting playwrights I know: Jenny Schwartz, Rinne Groff, Peter Sinn Nachtrieb, Carson Kreitzer… At any rate, I feel very lucky to be batting a thousand at JAW. And it’s fun that my first play, Kid-Simple, will be running concurrently with my most recent play; they could hardly be more different. I hope CoHo gets some of PCS’s audience, and vice versa.

This is a very literate town, full of bookstores large and small, teeming with readers, with great literary organizations like Wordstock and Literary Arts. And of course Futura gives us a time when the printed word is all but extinct. Do you foresee a time when actual books are as exotic as sextants and sackbuts?

I don’t think that time is far off! The prognosis isn’t as rosy for printed matter outside of Portland. It seems like a giant Barnes & Noble closes every couple of months in New York. And Amazon has been campaigning long and hard to make e-books outsell printed books. I finished the first draft of Futura in Spring 2008, and the world has already changed so much since then – I see people regarding the play less as a paranoid piece of science fiction and more as a play about current events! 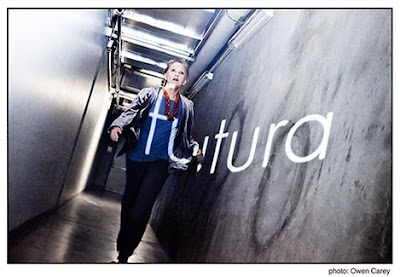 Why don’t you just move to Portlandia?

I hear the dream of the ‘90s is alive here. And you guys have very wide supermarket aisles, which is a very tempting thing to a New Yorker.

You go from Portland to Louisville, to premiere a new play at the celebrated Humana Festival. As you’re no doubt aware. What is that play about?

The play is called Maple and Vine – it’s a commission for Actors Theatre of Louisville, and I’ve been working on it closely with the director Anne Kauffman. It’s about an urban couple who retreat from life in 2011 and move to a community of 1950s reenactors. And the relative difficulty of life in the 50s – gender roles, racial prejudice, no Internet – perversely ends up making them whole. And of course the clothes are dreamy. Maple and Vine sort of feels like the 2nd part of a trilogy, started with Futura, about humanity and technology. I just haven’t written the third play yet.
Posted by Mead at 2/04/2011 11:09:00 AM

Thanks for the interview. Looking forward to seeing the play.

Me too, Ms. Queen. Jordan's oeuvre is gradually gaining steam for him as one of America's most intriguing writers, always extending the boundaries of what can happen in live performance. He's formally interesting, but also adds thought-provoking content to his plays that makes for a terrific one-two punch. I really love his play Finn in the Underworld, which caused quite an uproar at Berkeley Rep a couple of years ago -- would love to see one of Portland's more audacious companies take that one on.

Choices, choices... I probably will only get to see one of these plays. If you had to choose, which one would you choose?

Ah, but as a true Harrison scholar, CAW, you must endeavor to see both! Kid-Simple is Jordan's first play, whereas Futura is his latest (and least until the Humana Fest next month), and in between lies an astonishing range.

The PCS production has a nice long run, by the way, which includes several matinees; if you can make it to a matinee, we could go together.....