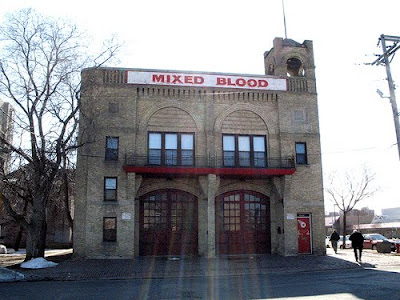 There will still be work to be done — I doubt patrons will flood Mixed Blood’s gates just because the plays are free, so there will still be two tons of outreach necessary to attract audiences — but the simple notion that all people are welcome is inherently radical. And you can bet that next time I’m in Minneapolis, Mixed Blood will be at the top of my theatergoing itinerary. I want to be among the number who are genuinely wanted in that building.
Posted by Mead at 5/28/2011 06:38:00 PM

As a Minneapolis native, I have to say that Mixed Blood was always one of the most revered companies around when I lived there. This bold step is revelatory. If MBT can make this work (and I think they can) it may be a new future for all of us.

I really hope it works. It has for Ops Fest (on a much smaller scale) - we offer free shows and pass a hat afterwords. I've long been of the belief that we do significantly better financially than we would if we charged admission.

This is GREAT news. And in the spirit of what Erik Ehn has been saying for many years. Shotgun Players in SF also didn't charge, but passed a hat...

Mead, I completely agree with your view of this.

In 1976 I was founder and artistic director of Pemberton Free Theater on Maryland's Eastern Shore. FREE THEATER. We didn't even pass the hat. But folks voluntarily contributed because they liked it. It works, albeit in our case in a low cost environment (i.e. we did ZOO STORY on a park bench in a park etc).

This reminds me of everybody in the state of Oregon having access to the shoreline. What would Tom McCall do? Let everybody see the waves, that's what.

This is a wonderful idea, and you've written an engaging, enlightening blog about it, Mead.