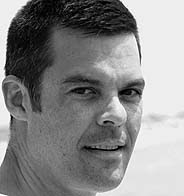 Recently the talented and pulchritudinous Adam Bock was awarded a well-deserved Obie for playwriting, the occasion being his play The Thugs. The announcement made me whoop for joy, which scared my dog and made the neighbors look up at my office window -- I was that happy. Adam's a singular talent whose playwriting I've been reading since he was a slip of a lad at Brown University some years ago. And while I've always admired his work, over time he's honed what he's up to with putting performative work on the live stage, to the point he's achieved total heavyosity. He knows exaclty what he's doing. His scripts are perfect blueprints for actions whose meanings are only fully revealed in the doing of them.

Actors love Adam's work because he honors their instincts as observers of human nature. His language is staccato, abrupt, fragmented -- scavenged from orts of human language in which people speak in shorthand, assuming the rest of their commmuications are understood even when they're incompletely voiced.

And ALL RIGHT, I'm especially gladdened by Adam's distinction because we worked on The Thugs with him in 2005, during PCS's summer festival of new work, JAW. After a week of workshopping, we presented Adam's play as a rehearsed reading, and it generated tremendous excitment in the audience. That reading was directed by Rose Riordan's, who is PCS's Associate Artistic Director; she also directed the full production in the current PCS season, when we presented the play as a late night offering. So it feels good indeed to have our belief in Adam's work ratified by an Obie.