What is the Many Hats Collaboration? As Alison Hallett described it in the Portland Mercury:

Many Hats is a theater company founded by three out-of-towners, women who have worked in New York and California, did time at the California Institute of the Arts in Los Angeles, and came together in Portland in 2004 around an interest in iconoclastic, challenging theater. 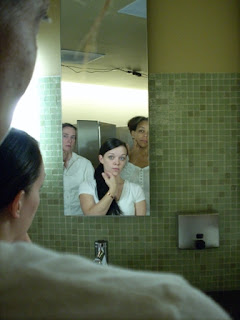 This coming Monday, July 2, 2007, the fabulous performance Many Hats unveils Rest Room. This is a piece the company presented last year as a site-specific piece for PCS’s Just Add Water Festival (JAW), where it caused an immediate sensation. Because the play took place inside a tiny women’s restroom, only a cupful of people could be in the “theater” with the actors. But many more could watch from outside the facilities, thanks to a live video feed.

Rest Room ran six times during the portion of JAW known as You Are There (the site-specific anthology). Between performances, the video feed was left trained on the row of stalls inside the restroom, and it was amusing to watch the consternation of patrons who approached the monitor only to behold a series of toilets. Most hastened away, lest something take place they would rather not see.

Now Many Hats unveils a new version of the play on July 2 as a benefit for the company. The short piece explores issues of women and addiction in an intriguing and surprising way. This is a great opportunity to witness the work of one of Portland’s most inventive ensembles.

Catch it while you can. Five performances only, all on this one night, in the eternally twilight atmosphere of the Armory’s spacious women’s restroom on the Gallery level. 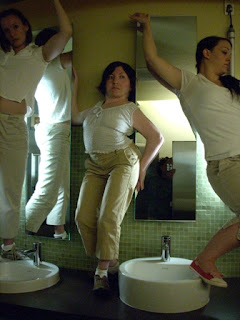 Location: The Gerding Theater at the Armory
128 NW Eleventh Avenue (at Davis)

Email ThisBlogThis!Share to TwitterShare to FacebookShare to Pinterest
Labels: don't miss this

I wish I could have seen it but I had to go to Seattle.

Hope it was great!

Sorry you had to miss it, Ms Sanders, but I'm sure you were up to something scintillating in Seattle, yes? What was it? A reading of new script of yours....or an "old" one?

Rest Room was AWESOME. A compelling sound score provided the back drop for the piece made up of interview snippets from women with serious drug problems of one kind or another, everything from heroin to glue to ecstasy. And Jessica Wallenfels' choreography was outstanding -- beautiful and disturbing and often wryly funny. Most of the 22-minute piece was a swirl of activity, but there were solo and duo moments that were surprisingly affecting.

Favorite moments: "private" scenes happening within the bathroom stalls, which the audience observed through video feeds projected onto the stall doors. And also a moment when all the characters were shut inside their own stalls, and then all exited them simultaneously -- it was like the Marx Brothers meets Robert Wilson.