At last: a No Exit I can live with 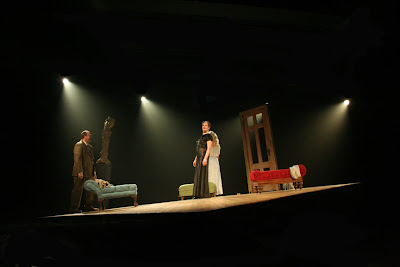 Plays I refuse to sit through again in this lifetime:

Although I must admit. There’s a passel of plays that always struck me as thunderously boring in their original forms that have received truly astonishing makeovers from gifted renovators – face-lifts so total as to make those plays entirely fresh experiences. The Wooster Group’s version of The Hairy Ape. Neal Bell’s transmogrification of that shabby little shocker, Thérèse Raquin. Steven Cosson’s uproarious revision of The Children’s Hour, retitled Fingered! (true, this was an out-and-out spoof, but still). And now, right here in Cascadia, Jerry Mouawad and Imago Theatre have actually made me enjoy my most abhorred script of all time, a threadbare little play I swore I would never attend again under any circumstances: No Exit.

The siren call that got to me get over myself was the casting: JoAnn Johnson, Maureen Porter and Tim True, three of Portland’s finest actors. Just as expected, they were superb in every way. What I didn’t expect was a set design (created by Jerry Mouawad, who also directed) that opened up the play’s meticulous triangulation in ways I had never imagined.

As conceived by Jerry, the room where the condemned are to spend eternity together is a flat plane in space, surrounded by infinite darkness on all sides. And it tips. The slightest imbalance puts one character radically downstage, another high in the air. Sudden feints cause the room to reel. Only a carefully choreographed suspension of emotional ballast keeps the room in equilibrium – the rueful state where the play comes to a rest.

Of course this is what the play is supposed to be about, but when have you ever seen this realized with No Exit? All the tension and drama I missed through years of seeing this play done badly melted away, and suddenly I saw the taut, thrilling drama Sartre must have originally envisioned.

Oh, I wanted to add that Maureen, Tim and JoAnn are ably aided by Bryce Flint-Somerville, who played the Valet with demonic glee and held his own with his colleagues. Ultimately, to be sure, this is a version of No Exit, but grab this chance to see what’s probably the only good production you’ll ever bear witness to. This weekend’s the last one of the run, and since Saturday was packed to the rafters -- literally -- I suggest you get tickets soon. Otherwise: No Entrance.
Posted by Mead at 11/09/2009 10:38:00 PM

Email ThisBlogThis!Share to TwitterShare to FacebookShare to Pinterest
Labels: Imago

Hell is other playwrights?

For my list (& certainly the play that is the subjct of this post.... although I do hear very good things about this production):
Our Town
The Fantasticks
After The Fall
The Sound Of Music
Peer Gynt

I am with you on the "Roman comedies".

Agreed! I saw No Exit last weekend and it was wrenching. This was one of those plays that I thought of as a piece of theater history that I HAD to study, but would never actually enjoy. this production was beautifully acted and so tight and concise!

For the record, my list of plays I will never willingly sit through again are:
Zoo Story
Waiting for Godot
The Crucible
Three Sisters

Funny, I had considered adding Peer Gynt and The Crucible, too... just didn't want to see too cranky....

When I was working more regularly as a critic, I came up against this all the time. When my editor sent me to Blithe Spirit or another Midsummer, I had to go and keep an open mind, and try to write something other than what I was thinking: Why are they doing this play? Occasionally I had experiences like your "No Exit," but mostly I didn't. My Back Stage West colleagues and I once compiled our list of "don't bother" shows (and "please do" shows, too), and I reposted it here: http://thewickedstage.blogspot.com/2006/05/meme-me.html

Hilarious, Rob. And although the fabulous Imago production of No Exit proves that wit and intelligence can freshen many a faded "classic," I share your apprehension about Equus. Wouldn't matter who was in it or who directd it, I would have to say: Sorry. Just can't.

I for one was delighted to find Strindberg's "A Dream Play" on Rob's "Bring 'em on" list. I saw it in college about a hundred years ago, and I think, but I'm not sure, that it changed my life. (No, wise guys, it wasn't the world premiere that I saw.) Been waiting to see another production ever since, to find out if I'd find it profound or simply pretentious today. Has anyone seen a recent production? Has there ever been a recent production?