Forget what you believe about Philip Glass. If you’re accustomed to associated his music with numbing repetition and avant-garde antics, his opera Orphée is going to come as a surprise. Oh, it sounds like Glass all right. But yoked into the service of narrative, his music finds depths and nuances you don’t always find in classic operatic warhorses. 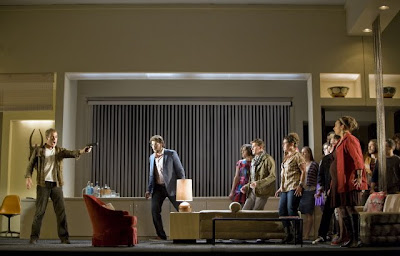 Even the avid opening night audience last evening, who clearly showed up ready to have a good time, was caught off guard by the Joplinesque music of the opening scene. From there the music morphs gradually through a series of musical moods, from movingly lambent intimacy to “heroic” set pieces that would please even grand opera enthusiasts.

Likewise, the story leaps through various dramatic styles. That story is not just the ancient Orpheus myth of a man who follows his wife to the underworld, but also Jean Cocteau’s pre-postmodern gloss on it. Now: I haven’t seen that film since my early 20s, which was probably too young to see a film about the power of love over time and about the way foreknowledge of death affects that love. At the time, I thought Cocteau’s effort was a pretentious snooze. Thirty years later, whether it’s thanks to Glass or from sheer dint of personal experience, I found the same story profound. 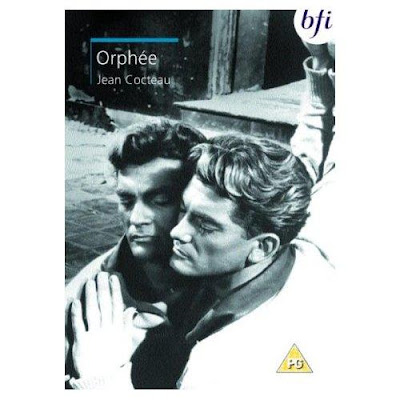 References to the movie abound – most conspicuously in an ongoing motif involving mirrors that provide both dangerous reflections and passage to unseen worlds -- but I digress. I was going to say that Glass’s unique dramaturgy recalls ancient storytelling more than modern; now we tend to expect a unified tone throughout, where the ancients had no problem mixing comedy and tragedy. The scene in which Orphée tries not to look at Eurydice is treated as out-and-out comedy – close to buffonery, really – yet you know what’s coming, and the permanent loss of Eurydice is all the more poignant because you’ve been tickled into forgetting it for a few minutes.

Most surprisingly of all is the opera’s final scene. Don’t worry, I won’t spoil it for you. Suffice it to say that it’s a marvelous bit of playwriting prestidigitation that makes you recast the entire myth.

Can you tell I was impressed? This is one opera you should catch – never mind if you don’t usually care for the form, and not to worry if you think you don’t care for Glass. It’s all too rare to see an opera that works as theater, so do yourself a favor and go. Just three more performances.

By the way, almost as much fun as the opera itself was the fab celebrity blogging table, which was very much its own event. To catch up on what the opera experience was like as it unfolded, started with Art Scatter’s preliminary account here; Mr. Scatter provides you with links to all the bloggolalia. His cohorts included Cynthia Fuhrman, Storm Large, Byron Beck and even (from backstage) cast member Marc Acito.
Posted by Mead at 11/07/2009 11:05:00 AM