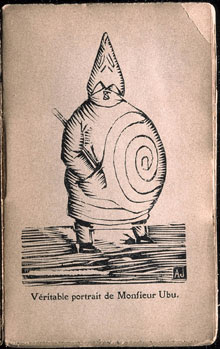 Alfred Jarry changed my life forever. You know, the obnoxious pixie who dashed off all those Pere Ubu plays? Yeah, that guy.

Way, way back in the 20th century, I had landed my first-ever theater job working for Storefront Actors’ Theatre, right here in Portland, and boy did I think I the world had never seen such wild plays before. And then I saw a flyer about a production being put on in the basement of a speakeasy over on NW 10th & Everett.

The venue was then called The Long Goodbye – a bar and sometime music club. Now it’s a popular watering hole known as The Life of Riley, but in an earlier incarnation it was quite the hotbed of performative activity. And all of the sudden it was hosting someone I’d never heard of before, who was putting on this play with the funny name – Ubu the King. Its flyer claimed the original production had basically unleashed avant-garde theater into the world.

So I went, all by myself, to see what the fuss had once been about. Amazingly, what I beheld looked much like what the play’s first audiences witnessed way back in 1896:

[T]he scenery was painted to represent, by a child's conventions, indoors and out of doors, and even the torrid, temperate, and arctic zones at once. Opposite you, at the back of the stage, you saw apple trees in bloom, under a blue sky, and against the sky a small closed window and a fireplace . . . through the very midst of which . . . trooped in and out the clamorous and sanguinary persons of the drama. On the left was painted a bed, and at the foot of the bed a bare tree and snow falling. On the right there were palm trees . . . a door opened against the sky, and beside the door a skeleton dangled. A venerable gentleman in evening dress . . . trotted across the stage on the points of his toes between every scene and hung the new placard on its nail. (Arthur Symons)

Several near-riots took place during the premiere performance – an event to which we can only aspire today. W.B. Yeats was present for the premiere, which prompted him to say, “What more is possible? After us the Savage God.”

One of my favorite moments in the production I saw was a scene that called for the Polish army to march across Ukraine. The play’s ingenious metteurs en scène accomplished this by means of a clothesline from which Styrofoam head forms were suspended and could be yanked along in fits and starts; each one was an outlandish parody of a military thug, parading by while Ubu urged them obscenely on.

For me, the effect on my young mind was all Jarry could have hoped for. The gleeful transcendence of all things versimilitudinous was a liberation. Why should the stage, or performance, or language slavishly reproduce quotidiana? Why not be reckless and uproarious and make coming to the theater an event, a spectacle, rather than a literary observance?

And the rest is … lengthy. Since then I’ve seen Ubu Roi many times, but the shock of the new could never be repeated.


By the way. As if in proof that all our thoughts, which we think come unbidden, actually come from the collective unconscious, I was mulling Ubu over when a friend of a friend happened to mention that a new book’s just been released this month entitled The Play That Changed My Life: America’s Foremost Playwrights on the Plays That Influenced Them. Writers such as Lynn Nottage, Suzan-Lori Parks, Sarah Ruhl and John Patrick Shanley (to name only a few) discuss first seeing the play that propelled on their first faltering steps as would-be writers. I am heading over to Powell’s tomorrow to get the last copy in stock. Maybe I’ll catch you there.
Posted by Mead at 12/14/2009 09:15:00 PM

Thanks for the heads-up on that playwrights book! I hadn't heard of it until now. Heading over to Amazon....