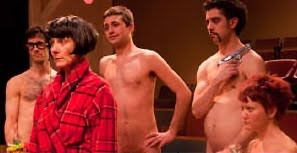 Ya, the holiday fare is upon us, including my own contribution to the crowded performance roster. But there are alternatives – antidotes, even. Portland Playhouse’s Bingo with the Indians, while not avowedly an anti-Christmas show, has a wintry feel to it, and is just about as far from 34th Street as you can get at this time of year.

Since the play is by Adam Rapp and aims to be a goddam laff riot, it’s anomalous from the start. It’s Adam at his most delirious and most reckless; the actually storyline doesn’t track, but you soon understand that it’s not a play about careful plotting anyway. One reviewer referred to the script as “grimy surrealism,” which covers it pretty well.

Many people – well, let’s face it, most people – will not appreciate the play’s giddy unwholesomeness or its potty-mouthed banter. (Don’t worry; the trademark Rapp sucker punch appears more than once.) But I was beguiled by its very premise: that what starts out as a demented-looking gang of thugs turns out to be a rag-tag team of downtown theater avant-gardists hoping to fund their next production by knocking over a bingo game.

Go if you dare. And I hope you do. Go for the obscene insults (I’ve tucked a few away for future use), stay for the stand-out performances by John San Nicolas and Lorraine Bahr. 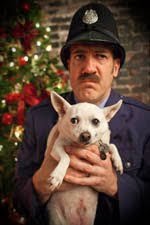 Across town, the best anti-holiday show of the reason is playing at Third Rail: The Lying Kind, by Anthony Neilson, which is set on Christmas Eve. Don’t miss this. How often do you get to see a balls-out farce? I mean: slamming doors, pratfalls and gobsmacking plot reversals, all stemming from a misunderstanding that could have been avoided in the story’s opening seconds. Now that’s entertainment!

But this ain’t Benny Hill. Expect Neilson and Third Rail to find the razor-sharp edge of human nature to hone the humor into something that can cut you. Not since Joe Orton have I seen farce that’s this heedless of its characters’ well-being. But make no mistake, you’ll laugh like a maniac, and even develop affection for the two hapless constables at the heart of the story. As one character puts it, there’s always “a little sweet corn in the turd.”

This Sunday, by the way, December 6, immediately after the matinee performance (i.e., around 4pm), Third Rail’s hosting a panel discussion to explore how Anthony Neilson achieves his hilariously misanthropic magic. Philip Cuomo moderates, and those impaneled include Scott Yarbrough, Victoria Parker-Pohl, and ME. So come on down to the World Trade Center and use the occasion to see a play you will never forget.
Posted by Mead at 12/03/2009 10:33:00 AM