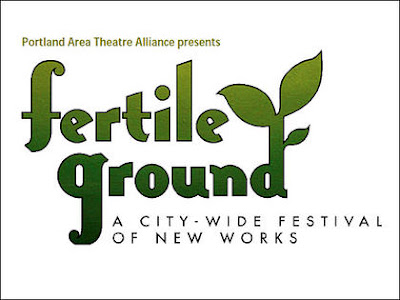 Portland’s scrappy, anything goes, DIY theater fest opens tonight, launching 10 crazy days and night of marathon theatergoing. Since at this point I’m officially the last person in town to handicap the Festival, I’m going to be quick.

TONIGHT I’m attending Nick Zagone’s The Missing Pieces at the Portland Playhouse, a play about a boy's self-initiation into a big, big world. The play is dear to my heart, since it started out in PlayGroup the now-defunct PCS writing group that morphed into the fabulous Playwrights West), and was presented in JAW 2009. And now the full production, which runs through January 30 -- unless, that is, it becomes a huge hit like the Playhouse’s Festival offering of last year, Hunt Holman’s Willow Jade, which went on to win a Drammy Award for Outstanding Playwriting. Break many legs this year, Nick.

Just a few more highlights before I head out. Kim Rosenstock’s aleatory 99 Ways to [interfere with] a Swan continues its wildly popular run at Theatre Vertigo; and the always absorbing and startling Hand2Mouth company presents a new piece by Erin Leddy entitled My Mind Is Like an Open Meadow. And a young audiences piece that adults will enjoy as much as their kids is a wild new Monty Pythonesque version of Robin Hood, penned by James Moore (yes, that James Moore, he formerly of defunkt fame) at Northwest Children’s Theatre. (Okay, so I’m the dramaturg — I can still say it’s hilarious, right??)

Several staged readings of note also grace the Festival, including Andrea Stolowitz’s mindbending new play Antarktikos (on which I served as dramaturg and Gemma Whelan directed) at ART, and Steve Patterson has an eerie new play entitled Immaterial Matters, presented at CoHo Productions. Also Claire Willett has a new play, That Was the River, This is the Sea, co-written with Gilberto del Campo, which has a whole run at a new venue, The Art Department.

AND I can’t wait for Futura, Jordan Harrison’s bracing dystopian view of the future of literature. Though the official opening is February 4, Portland Center Stage is opening its invited dress rehearsal to Festival passholders, and discounted tickets during the regular. Do not miss this one.