When Irish guys are stylin’ 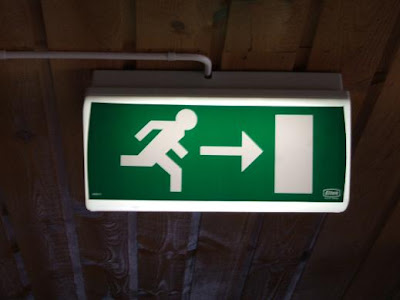 Across the country but especially here in Portlandia, I’m famous for evaporating like morning mist. Whether it’s a theater event, an art opening or Storm Large’s surprise party, take your eyes off me for a minute and I’m gone for the night. No. I'm not going through that awkward stage. It’s just hate the long goodbyes that are the fallout of social occasions.

My technique, honed by years of disappearing acts, involves scoping out all available exits upon arrival. Ideal targets? Egresses located just past bathrooms; back doors; secret passageways (oh yes — for some reason these abound in Portland). A quick scrutiny of “alarmed” doors, by way of checking whether their wires are attached or not, often yields handy exits where angels fear to tread. And catered affairs are a bonus; the servers will gladly clue you in about any hidden corridors or tunnels.

Imagine my surprise when “Cousin Tabitha” recently informed me that there's a term of art for the disappearing act: the Irish Goodbye. There’s even a Facebook page dedicated to the practice. So apparently I come from a long line of escape artists; it’s actually my genetic heritage.

Recently, though, that changed for me when I donating my aging Jetta to AllClassical. Now I get around by walking (a subversive act for this former Angeleno), busing, cycling, renting the occasional ZipCar. And also the kindness of acquaintances.

Whereas at first the inconvenience of all this seemed colossal — I mean, the ability to take off on impulse is very nearly the definition of American, is it not? — it’s turning to be a kind of blessing. Last week, for ex, Olga Sanchez and I got lost in the fogbound northwest hills and had a fun adventure together. My bus rides around town have resulted in a great increase of reading (and when you do that for a living, you know that can’t be bad). In attending Superior Donuts last week with my Drammy colleague Barbara, I found much about her storied career that I’d never suspected (since I’d never had the time to ask before). From the bicycling, I’ve discovered that oxygenation is entertaining. And last night, instead of being the first guy out the door at Vertigo, I headed over to The Blue Monk — ostensibly to wait for my ride home, then going on to have a rollicking conversation with playwright Kim Rosenstock and director Megan Kate Ward.

As recently as a few weeks ago, none of this would have happened. Had I still my own car, in each of these cases I would have appeared and vanished suddenly. Like Count Dracula, but without the starched shirt, cape and pomade.

So for now, anyway, it’s farewell to the Irish Goodbye and hello to a more earthbound MrMead than perhaps you’ve spotted fleetingly in the past.

I was glad you came out last night. Hanging out looks good on you! x

Well, THAT explains a lot. :) Beautifully written, as always-- thanks for sharing it, Mead!

Yours have always been the most Cheshire of smiles.

I miss the theater crowd....and especially you disparaging...had no idea it was planed!?! Humm....you are far too clever for me.

Anyway so miss my theater people...darn this silly Halloween folly!!!!

Thank you all for your kind comments. And observations. And personal remarks. Ms. Queen, I'm sure you meant disappearing, rather than disparaging...... right?? See you at Fertile Ground, which opens tonight! I'm kicking it off by going to Nick Zagone's Missing Pieces at Portland Playhouse.