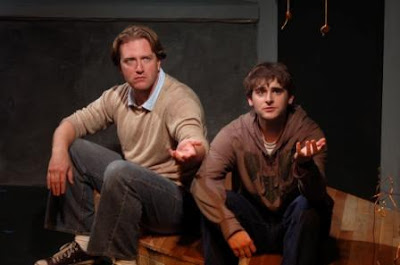 My big birthday weekend got off to quite a start last night, when I headed off to see james moore ’s new play, wish, produced by one of my favorite Portland companies, defunkt theatre. Officially playwriting credit goes to james, but the script was developed through a workshop process with the other defunktionals.

Defunkt works out of The Back Door Theatre, which sounds like a dirty bookstore but is actually one of Portland’s tiniest venues – a Lilliputian black box behind the Common Grounds Coffee House over on Hawthorne. I got there early, and with a slightly upset stomach, thanks (I now think) to some new medication I’d swallowed an hour prior. And for some reason – insanely, as it would turn out – I decided that a tumbler of hot chocolate would be just the thing to soothe my stomach.

Already you know where this is headed.

The house opened and I took a seat in the second row. Behind me sat three women of a certain age. I overhead this little exchange:

Lady 1: And so….here we are! Surprise! This is the start of your birthday weekend!

Lady 3: Your birthday. We’ve planned a full agenda of things to celebrate your birthday all weekend long, and this is our first stop!

Lady 1: We’re seeing this play for your birthday.

Lady 3: What’s the matter, don’t you want to see this play?

[30 or so seconds of silence, then a complete change of subject]

They uttered this dialogue within earshot of the playwright and his girlfriend, who were sitting nearly next to them. But then, exactly as though this Beckettian exchange was the evening’s curtain raiser, the lights went down and wish began.

I loved it. It began as a quirky comedy with a very light, even breezy touch – a departure for james moore for sure, I thought. But of course that was a feint. The play’s most beguiling character is introduced in the next scene, and we learn shortly thereafter that she’s been brutally murdered. From there the play becomes a mystery of sorts, David Lynchish in the sense that the bottom drops out of our assumptions over and over again. In the final’s final movement, we were treated to a descent into an eerie dreamscape in which a skein of psychological tropes are investigated and then set aside – but not discarded. Several narrative possibilities are suspended in a floating solution of images, repeated phrases and references to people, objects and even a hamster, all of which seemed inconsequential earlier in the play.

That’s all I can tell you. I don’t know how it turned out, because I was coping with my own distresses. As the play went on, my gastrointestinal problems were growing increasingly urgent. And, well. Not that you asked, but I spent about a half hour trying to will the bile in my gut to stay where it belonged. After all, I was at the dead center of a 40-seat house; the playwright was seated behind me, the actors were right there in front of me. I put things off as long as I could, but it got to where a brackish liquid was creeping up my throat and I could no longer swallow it down. I thought oh my god, I’m about to give these actors the worst review of their lives by vomiting right at their feet!

Fortunately at that moment they moved upstage. I took advantage by jumping up, almost knocking over the poor guy next to me (actor extraordinaire Tom Moorman, BTW) and dashed out of the theater and into the cafe. Of course the bathroom was locked, so I ran through the place like Swamp Thing was after me, into the street. It must have been startling; I remember hearing someone drop a plate.

I got down the street only as far as the restaurant next door – which, alas, had large windows fronting the street – just as a large, voluble group of diners were exiting the place. I rushed to the low hedge underneath the windows and emptied a steaming torrent of hot chocolate into it. At least I supposed that’s what it was; it smelled like bad clams.

All the conversation around me stopped.

I straightened up, cleared my throat, and walked around the corner with as much dignity as can be managed when there’s cuckus on your sports jacket. I didn’t even consider going back in the theater – just found my car, leaned against it and cried for a few seconds, then got in the car and drove slowly, slowly home.

I was told later that night by the playwright that I missed his favorite part: the hamster opera! And so, my disgrace notwithstanding, I may have to return to the scene of my ignominy and see wish all over again. It’s worth it, not just to see singing hamsters but to revisit the story with a more omniscient overview. Beside, the acting was a pleasure throughout -- especially from Zero Feeney, a performer of strangely graceful gravity. You should see it, too; it’s the perfect antidote to all those bland television shows that expect nothing of you and don’t really need you to see them in the first place. Treat yourself now. Don’t wait for your barfday.
Posted by Mead at 10/10/2008 10:25:00 PM

Email ThisBlogThis!Share to TwitterShare to FacebookShare to Pinterest
Labels: defunkt theatre, I say it's my birthday, james moore, tom moorman

ha! and aw. poor mead. but much comedy in the telling, that takes style and talent.

2. zero's an old friend, i will have to go see wish, for many reasons.

3. not the least of which: hamster opera?

5. if you get a chance, go find Joe Sousa in the call center one of these days and introduce yourself--a fine fellow and actor, playing the fool in our baseball production of Lear.

Next time, we need to cut you off earlier. HAHA. Great story. The kind you'll always remember and cherish.

I am so sorry to hear of this Mead. Are you feeling better?

Sheesh. And I thought having to pee during a show was torture.

I agree about Zero, though: one of my favorite actors in town. And a helluva mensch to boot.

Am I forgetting anything? Oh yeah - Happy Birthday.

It's all about the hamster. Especially the Hamster Song. Aren't there Drammy's for puppetry?

Oh Mead! As someone with chronic stomach issues, I can't tell you how often I've been in a similar situation. It's one of the reasons I always sit on the aisle now. Your story is hilarious - but what a nightmare at the time. I do hope you are feeling better! Hugs.

I had to go back and reread this story today, because the memory of it from days ago was still making me both chuckle with delight and give a big "awwww" in sympathy.

And because I wanted to read the phrase "hamster opera" again, to see if it was real. It was. Hooray!

I laughed my ass off when the hamster burst into song. And yes, I too thought it was very Lynchian.