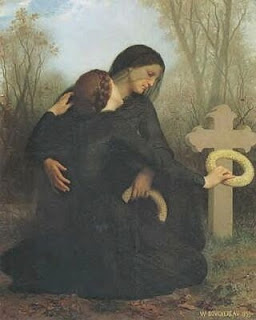 Sure, you knew that Hallowe’en is an elision of All Hallows Eve, but what about All Hallows itself? Better known today as All Saint’s Day, it’s sort of a European Day of the Dead kind of thing. November 1 honors saints in the broad sense of dead people who have “attained the beatific vision.” It’s a holy day of obligation in some corners of the Catholic dispensation. The following day, All Souls’ Day, is set aside for the “faithful” who are not destined for Hell but who still have a ways to go before acceding to their ultimate heavenly post. Praying for them is understood to help walk them up the stairs, as it were.

My sainted mother was/is Catholic. My father, well….let’s say his spiritual interests were more atavistic. This meant they had in common an uncommon sense of an unseen world impinging upon human affairs. Though I was born on October 10, she took a bit of a risk and waited till Hallowmas to have me baptized. The risk, you see, is that had I died prior to baptism, I would have spent eternity floating around in Limbo, happy enough but ignorant of the limitless bliss I might have enjoyed if not for my parents’ intransigence.

But all went well, and I was formally presented to the unseen world on November 1, in the company of the all the saints.

If you and I are acquainted, you may judge for yourself whether this bit of sympathetic magic panned out as my mother hoped.
Posted by Mead at 11/01/2008 10:18:00 AM

Email ThisBlogThis!Share to TwitterShare to FacebookShare to Pinterest
Labels: All Hallows, All Saint's Day, All Souls' Day, Hallowmas, Limbo

i'm so happy you greeted us all, officially, on all saint's, mead. :) a good day to get sprinkled. or do your folks dunk? or pour? in the greek church they dip, i believe. my father always called it skinny dipping. in the lutheran church we sprinkle. no. no we don't, either. we pour. i'm pretty sure we pour.

thank you for the follow. a pleasure to see your spooky little icon every day! where on earth did you dream that up? is it a rose creation?!

I saw Purlie Victorious at an HBCU in 1973 or 1974. In the clip you provide here I see so much I missed the first time. I think I was too young to grasp much of it back then.

Your mom was a brave soul. My mom had me baptized twice, for fear of death. A quickie blessing in hospital, with another formal ceramony (complete with white, lacy flowing baptismal gown) later in the church. No limbo status for her beloved! lol

We did however dedicate many a rosary in May - Mary's month- to those poor babies in limbo, in hopes we could elevate them to heavenly status.

I do believe the church has done away with limbo, thus releasing all those babies to heaven.

Xanandaji, you recognized that evil genius of Rose Riordan! That image is indeed her handiwork.

And CC, it's gratifying you appreciated the link to Purlie Victorious. I feared that ref was way obscure.

CAW, it warms my cockles to know that the Church has released all those little unbaptized babes. I always thought that was an unfair bit of metaphysical legislation ... I mean, babies can't baptize themselves, so why aren't their slug-a-bed parents sent to Limbo instead of them? Answer me that, Benedict XVI!

Well, apparently he already has. So much mas.

In the Catholic baptism -- as least in mid-20th century St Louis MO -- we were neither dunked nor sunked, but rather sort of anointed, which seems apropos for my particular Saint's Day lavational.

i didn't know purlie v -- but cc's post (more namesaking... how synchronous) inspired me to check out your link. wow.

what a rockstar collection of words. [verbatim from clip] gorgeous gorgeous.

nevertheless and notwithstanding, even though i suspect that his soul is frying at this very moment like a fresh-caught, fat-whiskered catfish in the skillet of the devil! it would not be christian for us not to pray even for what we know is impossible -- that's his redemption!

therefore, knowing what we know and all things being equal, and since there are no people nowhere more practiced in the art of praying for the impossible, i'm going to ask you to lift your voices in prayer this morning -- i want you to let the lord hear, i say let him hear! just how forgiving his beautiful his black children can be!


hallelujiah!
right on up those stairs, brothers and sisters.
let's go right on up.