The Novel That Predicted Portland 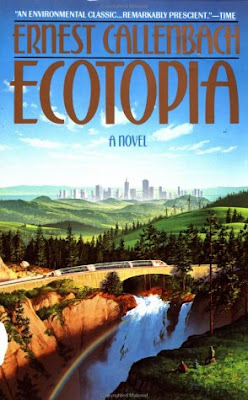 Thank you, Ms. Cynthia, you of Culture Shock fame, for bringing a fun Scott Timberg article to my attention that recently ran in The New York Times. Essentially the piece is a thoughtful review of the ‘70s classic cult favorite Ecotopia, a speculative work of fiction written by Ernest Callenbach. Some credit the author with kick-starting a barrow full of ideas that we are increasingly adopting.

Like what? At one point in his article, Mr. Timberg asks:

"So what has 'Ecotopia' given us?

"A great deal, thinks Professor Slovic of the University of Nevada, including the bioregionalism movement, which considers each part of the country as having a distinct ecological character to be cultivated. The green movement’s focus on local foods and products, and its emphasis on energy reduction also have roots in “Ecotopia,” he said. In fact, much of Portland, Ore., with its public transport, slow-growth planning and eat-local restaurants, can seem like Ecotopia made reality."

Apparently the novel’s influence has been so osmotic that I was unaware that the term “Ecotopia” originated with it. Today it’s used to refer to the Pacific Northwest in general, and occasionally it’s also bandied about as the region’s future name, reserved for when it finally gets fed up with the U.S. and secedes from the Union.

The other name you hear in this regard from time to time is “Pacifica.” Did you know that Oregon has legislation on the books that allows for an initiative process that could authorize secession? So do Washington and California. Hmmmm…….
Posted by Mead at 12/18/2008 11:15:00 PM

Another proposed name for the region that I love, personally, is Cascadia.

You might check this out, but I thought that following the civil war the right to secede was taken from the states by the federal government. The only state that retained it for a long time was Texas, as part of its deal in joining the union. Eventually it, too, had that right stripped away.

This is all just hearsay, though. Know any different, Mead? Anybody else? Am I just making stuff up here?