O yes. I was talking about myself.

Forgive me for my neglect, dear fellow traveler. I know you’ve been waiting for me to finish this post for a week. In the interim, much has happened, including the opening of our retooled, freshly re-tinseled A Christmas Carol.

Excuses aside (I mean, being busy never seems to slow down the good peeps of Culture Shock), last week, as you’ll recall, I was tracing the genealogy of my own aesthetic origins, and came to realize I owe it all (such as it is) to . . . Walt Disney. Or rather, Disneyland. That’s right. For all my high-mindedness, my earliest notions about what theater should be were shaped by a corporate entity that built its fortune through pillaging Western civilization’s folk myths and figures. Well, figurines: Snow White, Cinderella -- Paul Bunyan, for mercy’s sake. Abraham Lincoln, even. 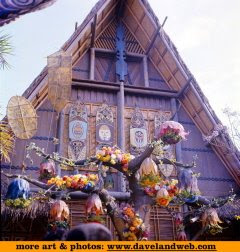 Case in point: as a little boy, I remember being captivated by a new attraction in “the park” called The Enchanted Tiki Room. This was and is an event of vaguely Polynesian inspiration in which animatronic birds of festive plumage preen, sing and burble away. Even as a kid I knew the content was corny, but the experience was….complete.

First we were admitted to an enclosed holding area outside the “hut” where the experience was to take place. As I recall, every feature of this pen was part of the experience, even the trash bins. There was a water feature made from bamboo pipes that emptied noisily into a pool; if you peered into the water, you saw that the pool’s bottom was littered with the partly submerged skeletons of lizards or anyway something of reptilian persuasion.

In due course we got to shuffle into the hut itself, and we (la familia) seated ourselves on one of four sides of a small square. Looking around, I saw gruff-looking tikis surrounded the playing area like they were guarding it. Above, thatched roof; behind, walls and windows shuttered with reeds. The hut seated maybe 80 spectators.

Then the show started with the famous nonsense of robot parrots waking up and cajoling the audiences with canned dialogue and mortifyingly twee treacle (“let’s all sing like the birdies sing / tweet tweet tweet tweettweet”). But the good part was the conclusion. On some cue I no longer recall, the parrots’ were yanked up and out of sight, and the tikis – which we all assumed to be mere set dressing – woke up. Bug-eyes gaping madly, wooden mouths moving up and down, these fearsome gods intoned some guttural, driving incantation (probably my first inkling there was more to music than Herman’s Hermits, Petula Clark and Papa Haydn). The tikis worked themselves up to a frantic crescendo, and at the very climax the lights went out (someone always shrieked at this), and the hut was lit only by flashes of faux lightning, which enabled you to see rain running down the windows.

As the thunder died out and we filed out of the place, I had no trouble belaying my critique of the material in favor of the experience I just had. And in years to come, through my early years at Storefront and on to my subsequent career as a groovy performance artist, it was some time before I realized my debt to the Tiki Room. The salient qualities were:


1. The performance surrounded its audience.
2. There was surprise (presumed inanimate objects lurching into performance).
3. Several senses were assailed at once.
4. The performance began upon admittance to the area, started long before the “actors” and persisting after they had exited.

Years later now, I’m more often in the position of enabling others to create their performative work than I am in doing it myself. But these things still inform my understanding of what makes an affective and memorable experience for audiences – which is, in sum, to transform them from passive spectators to participants.

Portland is rich in artists who espouse these same views, whether avowedly or not. But that’s a different post altogether……
Posted by Mead at 12/07/2008 08:51:00 PM

Though I find this vaguely surreal (and, like the best surrealism, somewhat amusing: "this is not a tiki room"), I know what you're talking about, and thanks for dragging a lost memory from the bottom of the well. I had completely forgotten the climax of the Tiki Room experience, which now, in context with the place and time, seems as deranged as some kind of acid trip gone wrong, but you're absolutely right: it's a moment of transporting theatre and, consequently, cool as hell and completely unexpected among all the cheese. It felt, of all things, a little dangerous...and so does a good play.

On a personal note, my mom adored the Tiki Room and spent a good part of her life trying to make her decks and patios as lushly furnished with plants and ponds.

[Note to self: try to work thunderstorms and menacing pagan gods into next play....]`

Thanks for the brilliant analysis. Can we start referring to this post as "Mead's Tiki Room Manifesto?" Or use phrases such as, "This play needs to be Tiki Roomed?"

I'd like to add another item to your list of salient qualities about the Tiki Room (and Disney magic in general): Attention to detail.

The designers probably didn't need to include lizard skeletons at the bottom of that pool but they did. In so doing, they enhanced both the verisimilitude and the fantasy of the experience.

Oh, Dr. Fun, you've nailed it! I grew up in So. Cal, and the company my Dad worked for, So. Cal Gas, "rented" Disneyland every year for the company picnic (how L.A. is that?). So we'd have the park to ourselves from about 6 pm to 2am once a year, with only a few thousand "guests" there, which is very uncrowded! And my favorite as a kid, and still way up there today, was the Tiki Room. I never missed it... and when I went to Disney World as an adult, I made a beeline for the Florida version. I was not disappointed..."in the tiki tiki tiki tiki tiki room..."

I managed to avoid Disneyland for the first 50 years of my life, until one long weekend my wife and children, armed with a quartet of cheap plane tickets, beat me into submission. Everyone should do this once, and I've put in my one time. The Tiki Room WAS the highlight of the visit, beating out that boat ride through the lagoon infested with pirates (I skipped all the scary upchuck rides). It's nowhere near as complete an aesthetic experience as the Tiki Room, but if you ever find yourself touring the funky family amusement park called The Enchanted Forest south of Salem, do check out the "Four and Twenty Blackbirds" room, with the pop-up singing blackbirds, one of whom looks and sounds suspiciously like Ringo Starr. I'm just sayin' ...

And, who else misses Trader Vic's, which used to carry out the tiki theme so splendidly in the space at the Benson Hotel now occupied by a steak house? I also happen to own a wonderful cocktail guide written by Trader Vic himself shortly after the end of World War II. He was a man with a passion, and quite possibly also a wooden leg.

Everyone should experience Disneyland at least once in their lifetime. I once had a colleague who worked as a guide on the Jungle cruise while in college. He reported that it was widely considered by the other Disney "cast members" to be a plum role because the guides were permitted to improvise and create their own shtick (within reason). He also told me stories of smoking pot in the secret passageways that keep the logistics of the Disney enterprise hidden from public view, but that's another story.

I never experienced the Trader Vic's in Portland, but once enjoyed a business lunch at the Vic's in Berkeley. It was near bayfront, far from campus and People's Park. Everything about it was old school -- a place to make business deals over Mai Tais mixed by the Phillipino bartender who knew your name and your preferred brand of rum. I remember leaving the lunch unexpectedly hammered.

Finally, my college-age son worked at the Enchanted Forest outside of Salem for a summer. The place has a wonderful kitschy charm, so be sure to go there in an ironic mood. On a hot summer day, it's a surprisingly cool, shadowed respite, in sharp contrast to the obnoxious, Thrillville next door.

wow, mead, i didn't remember barely any of the details you describe--for me the tiki room was always a cool respite and an excuse to sit down somewhere in the middle of a long hot disneyland day (went to high school in LA and marched in the disneyland parade every year with the band. because i am a giant nerd. and i can even now play the clarinet part to "it's a small world," in my sleep.).

the tune of course sticks in my head, and the words (particularly "all the birds sing words, and the flowers croon..."), and my major impression is of these bright bright fluorescent colors against a dark dark background that it hurt your neck to keep looking up at. oh, and the clacking of the animatronic beaks. sounds so negative; i definitely need to revisit (we took our 11-year old a few years ago, but at 6 and a half, nora is now at a prime age for her first visit, don't you think?), with your astute analysis in mind....