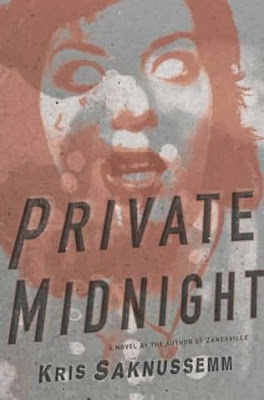 A few weeks ago I received a reviewer’s copy of Kris Saknussemm’s new novel, Private Midnight. How come? His publicist noticed I blogged about cultural life here in Cascadia, and at the time the author was about to do a reading at Powell’s.

Yes, that reading is long gone…oh well. But the impulse to review remains, partly because I wouldn’t mind getting a lot more free books this way. So here goes.

Perhaps you read Mr. Saknussemm’s debut novel, Zanesville? I have not, but I heard much about it when it was published in 2005. Apparently it was notable for taking the sci-fi/fantasy genre and turning it inside out – banking on reader expectations only to subvert them.

Now, it seems, the author has turned this treatment on another genre: the crime novel. As with sci-fi, noirish novels can be hidebound (as it were), hemmed in by trademark quirks like wisecracking gumshoes and designing femme fatales. But as the best in the biz have proven (Walter Mosley, for one), those same constraints can be startling in the hands of a captivating writer.

Insidiously enough, Saknussemm roots his novel firmly in the tradition of the first-person account of a hard-boiled detective. Like all such characters, Detective Ritter has his demons – in particular, a shadow side he’s trying to ignore, whom he calls El Miedo. Saknussemm sprinkles his story with fleeting references to Ritter’s intermittent homophobia and his attraction to the “feel” of women’s underthings, but not much is made of this at first.

Enter Genevieve, the femme fatale -- a mysterious Madame X connected to two recent, mondo bizarre suicides. She has a way of casually referring to personal experiences that happened centuries before; her physics-defying home is vastly larger inside than out. Ritter is contemptuous of what he tells himself are her “tricks,” but he’s inexorably drawn to her. The substance of the book details how she draws the detective slowly out of himself, so that gradually he not only faces his deepest desires but comes to embody them.

Genevieve is no social worker, however, and has her own motives for bringing about the detective’s transfiguration. In a series of jaw-dropping maneuvers so radical as to nearly derail the story, we follow Ritter through an underworld peopled by junkies, lushes, fetishists of all stripes, and some exceptionally creative homicidal maniacs, as he gropes his reluctant way to self-knowledge.

More than that I can’t say without spoiling the novel’s several reversals. But I can tell you that the author is at his best when describing his many netherworld scenes in living color: a raucous party at a tranny bar, a macabre scene of sexual recreation, a fulsome moment of triumph masquerading as degradation.

Not for the faint of heart. But if you can brave a descent into hell that only comes half-way back, you’ll enjoy getting to know Saknussemm’s creatures of the night.
Posted by Mead at 4/21/2009 07:05:00 PM

Mead, if you still have the impulse to review, we would love to run your writing on PDX Writer Daily. If you'd prefer to keep the reviews on your own site, of course, that's fine, too. (Though you'll probably find us linking to them, then...) If you'd like to discuss outside of comment boxes, you could email me (Dan) at wcevents@pdx.edu.

Dan, I'd be proud to have my writing appear on PDX Writer Daily, a site I check pretty much compulsively. I'll write you about it. Thanks!