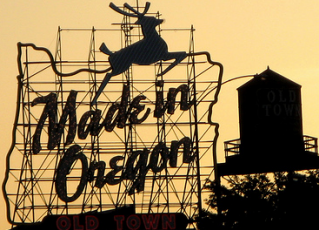 Every year is different when adjudicating the Drammy Awards, the ceremony known informally as Portland’s biggest cast party. Fifteen of us see scads of plays all year long; the commitment is to see at least 50 different productions annually, though many members see 80+. It’s a labor of love, for sure, and every Committee member takes the mission – to acknowledge outstanding work in the theater – very seriously.

This past season was my third on the Committee. For me personally (though I think most or all of my colleagues would echo this), every year has had its share of triumphs and disappointments. To put it another way: I’m always thrilled that work I thought was astonishing got recognized publicly as such; and I’m always agonized that some work I thought was gobsmackingly brilliant didn’t make the final vote.

For various reasons, this past ceremony had more than its shares of ups and downs. I had many more disappointments than previously, with work I strongly thought was outstanding going unsung.

That doesn’t mean I think the Awards are broken, or antique, or dispensable. There are checks and balances in the voting system to help ensure awards aren’t handed out casually. But that same system probably leads to less recognition being awarded that I/we would sometimes like.

A glaring case in point is that we wound up giving no award for Playwriting this time, even though there were excellent candidates. This wasn’t intended as some big statement about the quality of playwriting in Oregon; in fact, that art form is burgeoning here, and it could have been a great year to acknowledge that. But the vicissitudes of the system forestalled that, this time around.

Anyhow. Long post already, so I’m appending an eloquent protest crafted by the fab Marc Acito and the beatific Cynthia Whitcomb below, signed by 31 different playwrights who are either from here or who have been produced here. Marty Hughley published this statement today on OregonLive.com, where you can read people’s responses to it.

BTW, this protest has already had a positive effect – the Drammy Committee now has a subcommittee that takes special responsibility for the consideration of original playwriting. Believe me, the Committee is already rigorous in its deliberations; I wish everyone could hear the depth of discourse that takes place during its discussions. A subcommittee comprised of “stakeholders” in new writing will simply serve to augment those discussions. Nevertheless, as Martha would say: it’s a good thing.

An Open Letter to the Portland Drammy Award Committee:

On Monday, June 8th, the Portland Drammy Awards once again celebrated every aspect of theatre from actors and directors, to sets, costumes, sound, music, even going so far as to acknowledge the ushers and folks who work in the box office. One category, however was noticeably absent: the very people who create theatre from literally nothing and without whom there would be no theatre, save a few stray mimes and improv events. That’s right, the playwrights.

Portland had many productions this year that were either world premieres or written by local playwrights or both, including Apollo, Cooler, Holidazed, Crazy Enough, Live Nude Fear, New Believers, and Pylon. To snub this group is not only baffling, it’s an insult in the extreme.

Other cities, many less literate and writer-friendly than Portland, honor writers in their regional theatre award ceremonies: notably the Tony Awards in New York City, (awards for playwrights, as well as writers of the books for musicals); the Jeffs in Chicago (two writing awards for original plays and adaptations); the Barrymore Award in Philadelphia for a world premiere play; and three writing prizes from the San Francisco Bay Area Theatre Critics for new plays.

Portland has the biggest and best bookstore in the country. We have one of the largest writing organizations in the country, Willamette Writers, with 1,600 members. We have more best-selling authors than demographics would dictate (Jean Auel, Chuck Palahniuk, Chelsea Cain, Philip Margolin, to name a few). We have the Wordstock literary festival. And two new play festivals, Fertile Ground and JAW.

So why is it that one of the most literate cities in America, with one of the healthiest theatre communities, chooses to overlook playwrights for the second year in a row and the fourth time in the past eight seasons, ignoring such critically acclaimed world premieres as Celebrity Row and Another Fine Mess, the latter of which went on to become a nominee for the Pulitzer Prize? We the undersigned writers urge the Portland Drammy committee to wake up and acknowledge the source of great theatre.

Because the pen is mightier than the plastic stage sword.

I'm excited re the new Drammy subcommittee. It's a step. And yes, I wish that people would realize how difficult it must be for the DC to make these "outstanding" decisions...

Interesting blog! Would love to talk to you about a radio show next week --off topic of Drammys--more about funding world class arts orgs in these times. . . thanks in advance for your time!
Allison
503-260-9595