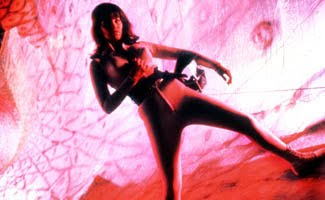 Sorry, this post is actually not about Raquel Welch and her pearlescent wetsuit, fun through the movie of the same title is. I hope you can adjust.

No, this is about my never-ending search for a drop of water to cool my burning tongue here in the vale of tears we call Planet Earth. Toward that end, I did something Thursday morning that I’ve wanted to do ever since I read about it as a youth: experience a session in a flotation tank.

Invented by John Lilly decades ago, the idea is simply that you submit yourself to a prolonged stretch of time in an environment where nearly all sensory input is “attenuated.” In fact the earliest tanks were known as “sensory deprivation” labs or “isolation chambers,” before some appalled marketing czar put a stop to that.

This adventure was a gift from playwright and adventurer par excellence Steve Patterson, who knows that I like to explore what consciousness will do under interesting conditions. And this was certainly one.

At The Deep Haven over on Hawthorne Street, I walked up the wooden steps of a classic PDX-style house – now an herb store, actually, the kind that stocks everything but eye of newt – where Christopher Messer then took me underground, to the basement and into the soundproof room where the tank awaited.

It was a sleek black box, gleaming and clean, but the scene’s a little like something from The Fearless Vampire Killers – not for the claustrophobic, anyway. But Christopher walked me through the whole process: I would be floating in ten inches of skin temperature water, salinated with 800 pounds of Epsom salts (!) so that I would have no choice but to float. Darkness would be utter. No sound would penetrate the chamber until faint music would cue me that 90 minutes had passed.

No problem, right? But once the novelty of the first few minutes passed, I didn’t think I could hack it. An hour and a half of just lying there? As I laid there buoyed up by the salt water, my mind raced through all I wanted to get done that day, including beating a looming deadline. Really, for the first 10 minutes I was sure that at any second I was going to get up, towel off and sneak out of the house like a thief.

But somehow, without even intending it, all that dissolved into the water. I began to scan my body mentally; stretch a little; experiment with the water’s incredible density. If I fell asleep, could I drown? No, as it turns out; even turning my head to one side was effortful, and would wake me up. The water cradled me like a warm blanket.

At some point it occurred to me that my auric field shouldn’t be dependent on an external light source. So I raised my hands in front of me, and – yes! There they were, the outlines of all 10 fingers faintly illuminated by a warm glow. Interestingly, tiny pinpricks of bright light, like sparks, twinkled all around the fingertips. And when I moved my hands, the impression of light remained where it started for a few seconds. 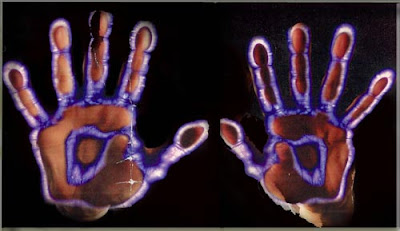 Following that I began to hear a soft, almost toneless sound emanating seemingly from within my head. This fascinated me, because at first I assumed my brain was inventing sounds just to amuse itself. But no, as the “music” gradually became more audible, I realize it was Christopher’s doing – my wake-up call. I was astonished. It felt like a half hour had passed at most.

I’ll be back to Deep Haven soon for a longer steep; it’s worth the soak just for the return trip to the world, which had a vividness reminiscent of Dorothy seeing Oz for the first time.

By the way, I went into the tank with a hateful headache that I’d had at that point for five damn days. And though it didn’t dissipate in the tank, a concomitant pain – aches in both shoulders – did melt away. Finally that evening the headache itself faded away and has stayed away.

Me: "Hey, Trish, there's a place here in Portland that has a sensory deprivation tank."

Trish: "It's Portland. That doesn't surprise me."

Me: "Here's something else that won't surprise you - Steve Patterson knows all about it, and took Mead Hunter there."

Trish: "Steve and a sensory deprivation tank? No. Not a surprise at all..."

Sounds like it was a blast, Mead! Thanks for sharing the story :)