Opera in the underworld

Mention “opera” and most people envision what’s now called “grand opera” — mammoth war horses, mostly from the form’s reputed 19th-century heyday. While grand indeed, this is also the era that gave opera a bad name with many of these same people, thanks to preposterous plotting and general obviation of basic acting skills, not to mention extreme length.

You can thank a handful of far-sighted directors, notably including Peter Sellars, for rediscovering baroque operas, where dramatic tensions often arise less from what happens and more from internally divided characters, like Xerxes and Orpheus. But wait! Doesn’t that sound like a modern sensibility?

Bingo. Many astute commentators, including the venerable Mr. Scatter, have noted an operatic curiosity: contemporary opera, written by notable composers such as John Adams, Philip Glass and, yes, the trailblazing Leonard Bernstein, seem to have returned to exquisite miniatures of opera’s earliest composers.

I myself discussed this with Portland Opera’s visionary General Director, Christopher Mattaliano, when we were seated together at a banquet a couple years ago. Which proves that once again, the advance guard of American culture is all thanks to me. Case in point: PO’s current offering is a dazzling triple bill that gives you Bernstein’s unfairly overlooked Trouble in Tahiti along with two Monteverdi gems, Il ballo delle ingrate and Il combattimento di Tancredi e Clorinda, all in scarcely more than two spellbinding hours.

Together the two composers comprise nearly the full span of operatic history. Monteverdi is justly immortal for composing opera’s first masterpiece, Orfeo. It’s exciting to see his two neglected chamber pieces presented together. First we see The Dance of the Ungrateful, which is essentially a meditation on a human cynicism that tends to take love for granted, eschewing its ennobling power. As a corrective, Venus bargains with Pluto to allow damned lovers to return to earth and scare the living back to their true purpose.

In a dazzling coup de théâtre, the opera moves seamlessly and without warning into the second piece, The Battle of Tancredi and Clorinda, which we understood is a corrective tale counterbalancing the wuthering ennui deplored by the previous story. This is reinforced through seeing the condemned of hell, who were mute in the first piece, adopt major roles in the second. 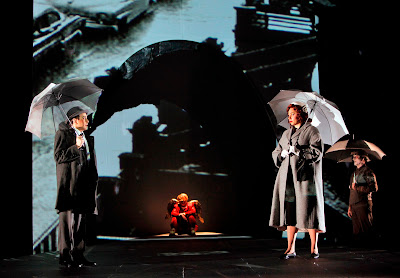 Following intermission, Bernstein’s Trouble in Tahiti seems at first to be … well, centuries away from Monteverdi’s brooding concerns. It’s a bright and sunny day in Suburbia -- in any suburbia, as the libretto makes clear. But we see at once that this is a feint, and underneath the cheery Formica surfaces is the very ennui Venus railed against earlier.

The two lead roles, played by Jose Rubio as Sam and Daryl Freedman as Dinah (pictured at left in the photo by Portland Opera/Cory Weaver, with a blind Cupid upstage) are outstanding as the husband and wife trapped in this Mad Men-like scenario, who feel unable to halt or even slow down their drifting apart. Gradually and inexorably, figures from the Monteverdi pieces populate the stage, sometimes adopting roles and other times simply bearing silent witness to the lives of the two mortals. Toward the end, there is the merest hint that this state of desuetude may be bettered — or will it merely be accepted?

If changes do happen for the better, you feel that it will be partly due to the invisible influence of Pluto’s emissaries, doing their best to provide a cautionary vision for Bernstein’s struggling 1950s couple.

Overall, this is a bracing and moving conception, one that brilliantly combines three very different operas into a single, cohesive vision. It’s also a glimpse into how opera can be so much more than the mere cultural duty to which it’s often relegated. Mr. Mattaliano and his company are to be commended to bringing us work that matters — opera that sticks with you long after the applause has died down. Bravo and bravi.

So take note: The triple bill has just three more performance, inclding today’s matinee, and then April 1 & 3. Make sure you see this extraordinary presentation. Leave your preconceptions about opera at the door, whether they’re pro or con, and treat yourself to a trip to the underworld you’ll not soon forget.
Posted by Mead at 3/28/2010 10:46:00 AM