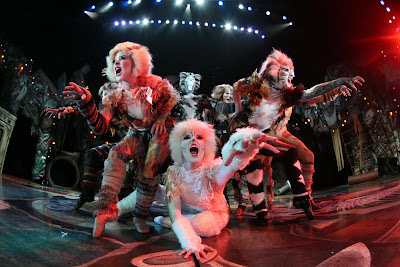 It’s always fun to go to public events with Megan. In addition to the pleasure of her company, I get all these approving smiles from women of a certain age. No doubt they’re thinking: isn’t that sweet, that nice man is taking his granddaughter out for some very improving culture.

Last night’s event was Cats. Yes, THAT Cats, the Andrew Lloyd Webber juggernaut currently playing at the Keller Auditorium as the Portland stop in a national tour. Though the spectacle premiered in 1981, I never saw it back in the day, because there were no comps whatsoever to be had. (In my student days, I saw only the second acts of Broadway shows anyway, and Cats just didn’t tickle my spider sense.) So I was grateful for the opportunity to see what nearly 30 years of fuss has been about.

Well. Talk about truth in advertising. The play is about cats. Probably you already know this is all based on a book of light verse by T.S. Eliot, of all people: Old Possum’s Book of Practical Cats, from 1939. (Intriguingly, however, the one song you can actually hum, Memory, hails from Tom’s groovier, more avant-garde phase.) None of it makes a lick of sense, really, but it’s all very colorful, and the talented touring cast dances their tails off. (Ahem.)

The video posted above is not of the current national tour, but this is exactly what last night looked like; apparently all the production elements are codified. Never mind that the dance vocabulary and Webber’s hodgepodge of a score are shopworn (the synth-heavy arrangements recall MTV of yore), the thing is an event. The gleeful opening night audience include a startling number of people (and I’m talking adults here) with velvet cat’s ears on their heads and/or sporting puss print outfits. Impressive!

Cats is probably not a show for jaded theater lifers like myself; I can’t help but see through the tricks and even be a tad irked by the staginess of it all. But for those who still thrill at pulsing strobe lights shone in their faces or for whom lots and lots of makeup hold a forbidden fascination, the show may be magic. Certainly last night’s audience enjoyed the play thoroughly.

Know what else I’ve never seen? Les Miz and Miss Saigon. I’m counting on the Keller’s Broadway series to also fill in these lacunae in my theater education, tool. Where was I, anyway, during the waning years of the Broadway musical? It feels like I skipped from Hair and Jesus Christ Superstar straight over to In the Heights and Passing Strange. Feel free to tell me what I missed.
Posted by Mead at 3/24/2010 06:32:00 PM

No, not as an elf, as an audience member.

"Cats" was my first Broadway show (I was 5) and yes, I wore a skirt with cats printed on it when I saw it.

If it makes you feel any better about your lacunae, "Wicked" came out when I was in high school, which means that every girl my age became completely obsessed by it... except for me, I still haven't seen it or heard all of the songs! Now it is almost a point of pride with me that I'm ignorant of it.

Thanks Mead! I always enjoy a night out at the theater with you! I doubt they think I'm your granddaughter!

I never could understand their popularity, though I have to admit "Rock'n'Roll All Night" is kind of infectious...wait. What?

I am glad you saw this show Mead. Kurt Conroyd and I are going to do a 2-man version of Cats sometime, and I need you to be on board.

Missed this "Cats," but have seen many, many productions, all out of obligation. I found the energy and commitment of the cast made all the difference (doesn't it always?). Best was probably a very young road company, obviously very excited to be on tour (most of them) for the first time, and utterly committed. Made me think this was the most expensive kids' show ever devised, and a very good kids' show at that.

"Wicked" left me cold. Seems s really mediocre (and sometimes grating) score. And "Les Miz" is worth seeing, or at least listening to: One of the best of its kind, although it's too long and sometimes hard to follow. A few really good pop songs in there, like "Master of the House."

Is this the place to confess (boast?) that I have never seen a single Andrew Lloyd Weber musical? Had a close call once or twice, but always managed to escape. Okay, okay, I'm a Sondheim snob. I admit it. I embrace it.

My first exposure (ahem) to HAIR was the L.A. production in 1970. Mother's Day, as it happens. I think they emphasized certain elements of the production in honor of all the Moms in the audience. This being L.A., the Moms loved it.

I got off the musical comedy boat at Little Shop Of Horrors, after being a little Musical Comedy Queen since age 5. I never saw Cats, Le Miz, Phantom or...now & forever CATS.

Well, it's now official. I must face the fact that no subject has garnered more interest in the past few months than this one....on CATS!

Haven't seen "Cats" and after Joe Queenan's biting essay on it and the "fiendishly vapid world" of ALW (in Red Lobster, White Trash & the Blue Lagoon, ) don't think I will!: "I came home from Cats feeling totally dejected. In the back of my mind, I'd expected the show to fall into that vast category occupied by everything from bingo to Benny Hill. You know: so bad, it's good. But Cats was just plain bad. Really bad. About as bad as bad could get. I consoled myself...that nothing I subsequently experienced could be in even the same league as Cats. Then I cued up the Michael Bolton record. So much for that theory."

Thanks for making the sacrifice for me. (BTW, the word verification for this comment came up "CATairso".)