By which I mean: last year. Have you noticed that blogging in general (the reading of, as well as the writing thereof) seems to be ebbing? Or, like me, have you been too caught up in the delirium of 21st century life for this to even really register? 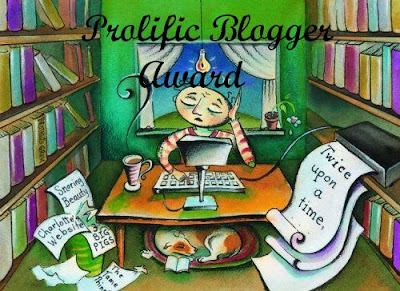 Covered with shame though I am -- I mean, it’s been nine days since my last post -- all the above has come to light because I’ve finally showing my virtual face in order to accept an utterly undeserved acknowledgment -- the Prolific Blogger Award, bestowed upon me 33 days ago by my colleague Dot Hearn.

O, the ignominy. Grateful as I am to Dot for this distinction, she deserves it far more than I; she’s logged four posts already for March alone. All the same, I’ll take it, of course -- attention is attention.

The way the game works is that as a new honoree, I’ll name seven more prolific bloggers, each of whom will identify seven more -- thus perpetuating the distinction exponentially. Thus it’s like a chain letter, but with the benefit of immediate gratification. Yet when I went go to some of the old faves (sorry, I won’t name names), I was dismayed to find the virtual ink seems to have run dry. Most of them wheezed to halt several months ago. One former comrade, whose work I read daily, is now a year in arrears! Most damning of all, for me personally, is that I hadn’t really………noticed.

Is this cyclical, part of the ebb and flow of cosmic drift? Or have we, as true blue Americanetskys, just used up the experience and moved on en masse as early adopters of fresher, more supple “social utilities”? Blame Twitter et al. if you want, but strangely, I’m getting more visitors to this blog than ever. Someone’s reading, but where have all the bloggers themselves gone?

So. “Now more than ever,” right? As a salute to the few still writing the good write, here’s a passel some of my most oft-visited blogs:

Marissabidilla. With observations on cultural life in San Francisco and beyond that somehow combine the glee of That Girl! with the solemnity of a probate lawyer, I hungrily await this girl’s next posts.

The “blog” of “unnecessary” quotation marks. Still wryly excoriating after all these years.

Regretsy. The name’s a play on Etsy, the site for all things handmade. All Regretsy has to do is cull the most gobsmacking inexplicable craft items up for sale (you mean that’s for sale?? no way) and repost them, often without comment. I can’t describe Regretsy any better that its own tag line does: “Where DIY meet WTF.”

Fertile Ground Festival. Temporarily dormant. Temporarily. It will rise again. Pre-fest and during it, Trish Mead’s street-level blog was a hotbed of ferment, a peek into the crucible of new work for performance. I miss it, and can’t wait for it to crank up again in anticipation of FG 2011.

Art Scatter. Mr. Scatter and his retinue, which include Mrs. Scatter and the Big Smelly Boy, is still my favorite cultural gadabout here in mossy Portland OR.

And finally -- apologies about self-promotion be damned! -- there’s my very own The Editing Room, which posts occasional news and open questions about the writing process. I post this so I that I’ll now go to my own blog and post something there for the first time in weeks. I mean months. But who’s counting anymore, c’est vrai?

...not really. I read you everytime you post, & I have a personal challange to do a post a day (& people seem to read it).
I always enjoy your cranky point of view.

Mead,
Your posting was so appropriate to what I've been thinking about. I posted my first posting to my own blog in quite some time, spurred on by the discovery of a friend's blog that I found..
There is something to said for TWITTER having had an effect on the blogging world. Tweeting just sounds sexier than blogging I think.
Blogging sounds like slogging. Why slog when you can tweet? Because slogging gets you farther, faster.

I'd like to thank my mom and my dad and my mentors and my manager...and Mead Hunter!

Oh, no, the orchestra's playing me off!

And most of all, thank you Jebus!

merci Monsieur Mead! I am going to put what you said as a blurb on my blog!

You have officially inspired me to give the FG blog a wake up nudge and see if we can keep the conversation going year round. Thanks Mead!

Thanks, Mead! Here at Art Scatter World Headquarters we're thrilled to accept this honor -- and right around Oscars time, too! We'll hold a meeting of the brain trust and figure out where to pay the honor forward.