Hilarity and Disparity at Portland Playhouse 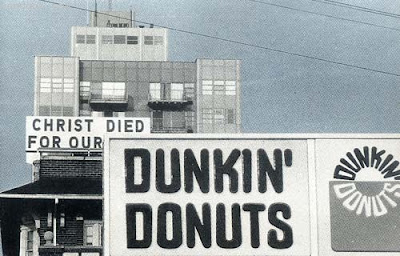 Currently playing at Portland Playhouse: one of my favorite plays of all time, Telethon, by Kristin Newbom. This play focuses on three people with various forms of disability, and their two underpaid, undervalued caretakers, who are only minimally more functional, all within the context of a “treat” for the disabled charges, as all five as adjourn from an unspecified fundraising event to a Dunkin’ Donuts. Most of the play is laugh-out-loud funny, but watch out -- you're being set up.

SPOILER ALERT! If you don’t want to know what happens in the play, read no further.

All five characters are put through a process defined by American holidays that call for or allow dressing up in costume. Over the course of Halloween, Christmas and Easter, the Dunkin’ Donuts bears witness to the changes — subtle, blatant or nonexistent — in their lives.

Telethon’s climax comes, aptly enough, at Easter, a time that celebrates renewal; the two caretakers are about to undergo major reversals of fortune. They're so caught up in their own news that they hardly notice the turmoil they’re causing their charges: one of them seems stunned, another cries quietly, and the third goes to a pay phone and attempts to call 911.

The uproar ends the scene and we segue to the Fourth of July, but now the Dunkin’ Donuts is quiet. And as we take this in the empty stage, we realize those five people will never visit the place together again. The phone is still dangling off the hook and, weirdly, we hear one side of a conversation coming out of it.


Now: when we first presented this play in reading form during JAW, and again now in Portland Playhouse’s excellent production, people have been baffled by this final scene. Some have gone so far as to say the coda has no relation to the play! But you know … it’s always worth our while to assume the playwright had something in mind. Such as an imaginative leap. Or to jump a synapse from one epiphany to the next, and ask you to forge the connection yourself.

In the wake of love lost, of abandoned relationships and the sheer heedlessness of life’s relentless momentum, the emptiness of the stage in this final scene devastates me. The sense of revelation hovering on the fringes, yet always just barely beyond our grasp, reminds me of Beckett’s most moving works.

I therefore want to share the text of this final scene with you (I have Kristin’s blessing and that of the show’s director, Rose Riordan), in the hopes that when you see the play, viewing the footage of the parade described below and hearing half of a conversation that’s like a lifeline to another time, the scene will have the impact for you that it does for me.

Telethon continues through this weekend, closing where the script begins — on Halloween.

THE STAGE IS DARK AND EMPTY.

A FILM IS PROJECTED ON THE BLANK MENU SCREEN. SHAKY HOME
FOOTAGE OF A 4TH OF JULY PARADE IN A SMALL TOWN... PEOPLE ON
FLOATS. COSTUMES. WAVING. KIDS ON BIKES. DOGS. CLOWNS. A
MARCHING BAND. STARS AND STRIPES. THE WHOLE DEAL.

A WOMAN’S VOICE IS HEARD,
THROUGH THE DANGLING PAY PHONE RECEIVER:

Remember that night out on the driveway?

Because the sunflowers had stopped blooming.
I picked the last three and brought them in.
They were a little mangled, but they looked okay.

No.
We had just come back from dinner.
You took us to that little restaurant in your old neighborhood.
What was it?

Nine wieners with everything on them,
six orders of fries,
four milkshakes,
a diet coke
and a sprite.
God.
The kids sat at the counter.
Spun around and around on the stools while we talked.

The first house you bought.
The dog you had before the kids were born.
That tattoo you got in the army.
Your job.
Those guys you had to fire.
Your brothers and sisters.
The town where you grew up.
The Sunday morning flea market.
Your grandmother’s farm.
The stack of Penthouses and bag of weed you had hid in her shed.
How your parents died.
Your first girlfriend.
What was her name?

You knew just when to leave.
Before the kids threw up from too much spinning.

I offered to pay.
You said it was your treat.

On the way back you showed us the best trick or treat house.
The one where the guy dressed up in stilts as Uncle Sam?
Remember?

When we got back we stood there in the driveway.
The kids rode their bikes around and around
And the sky turned from blue to orange.
You only had a few minutes before you had to go.

You looked so sad that night.

We want to make sense of it all.
Want to grasp onto some kind of reason for the hurt.

It all goes by so quickly doesn’t it?

They are ripped from us.
All of them.

They come into our lives.
The people we care for
Or who take care of us.
The ones we love and look after.
The ones who love us back
Despite it all.
And then they go.
Sometimes in a flash
Without any warning.
Other times in a long and lingering dance.

Yet the wars continue.
One grows into the next.
Kings and queens are killed and born again.
Discoveries, great works of art and riches are made, displayed
and forgotten.
We learn to spell.
We memorize the vocabulary words and dutifully we take the tests.
Our tiny world builds upon itself.
Accumulates.
Like soap bubbles in the bath.
We gaze at ourselves, naked
And we wonder-
This world we are creating,
is it -

Oh, that’s okay
I should go too.
Yeah.
Okay.


DIALTONE.
THE FILM WINDS OUT.

Thanks for sharing. I wish I had a life this time of year I would love to see this :(

I mean how can I not like a play that starts on Halloween :)

So I appreciate the run down. Maybe someday!

Oh, of course, Ms. Queen! This is your craziest time of year. "It's beginning to look a lot like Hallows....everywhere I go...."

Mead,
I really liked the play. I'm glad you are a fan of it, too. I love your blog.
ciao
Deb Lee

Thank you, Deb. And allow me to return the compliment: I remember you very fondly as Shelly when we did the JAW workshop. You were amazing!

Do you remember all that commotion at the talkback, from a handful of people who wanted a "happy" ending? That was interesting. Some lady cornered Rose in the elevator afterward and expressed her indignation that disabled people were being held up to ridicule -- talk about missing the point!

Reportedly, none of that has come up at Portland Playhouse's post-show chats. Funny what a difference a few years can make.