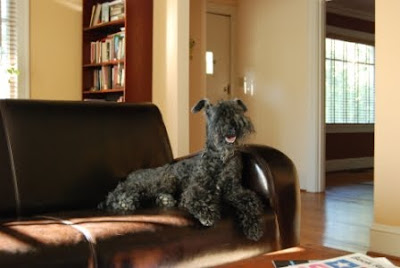 Never fear, this blog will not become all about Mac (see previous post). But I feel compelled to add the story of his death, because in describing I may get a small measure of closure.

The days leading up to last Thursday were fraught with a confused tangle of worries, fears and hopings against hope. When Mac became mired in a depressed funk, unreachable and unresponsive, I turned again to Patricia Schaller, animal psychic extraordinaire.

Maybe you remember Patricia from her first house call to my home about two years ago. This time, when I made the phone call to her, she was already tuned into Mac. Immediately she said, “He wants to go but he has something to tell you first.” We made an appointment two days later, for that Thursday.

By then, Mac was so bad off — struggling for breath, wincing from pain — that I worried he would die before Patricia could get there. Yet he was working so hard to stay in his body that it occurred to me he might be living just for her visit. And I believe this turned out to be true.

Patricia was expected at our home that last day at 3pm, and it had been a terrible day, beginning with — well, never mind all that. Suffice it to say that Mac was more dead than alive by the afternoon; he was lying on his favorite bench, the one by the picture window, gasping for air. At 2:30 — a full half-hour before Patricia was expected — Mac stood up, shook his ears out, jumped down from the bench and wagged his tail. We gaped at him.

“Patricia must be drawing nigh,” I said, thinking maybe she had just left home or exited the freeway or something. Just then there was a soft knock at the door and we knew what Mac already knew — she was there.

Once in, Patricia got on the floor and looked directly in Mac’s eyes, nuzzling him with her nose. They communed silently for a few minutes, with a look on Mac’s face of immense relief. Patricia had James and I do a meditation/visualization to calm down Mac’s breathing — and yes, this actually happened — and then she began to channel information.

Right away after that, Mac announced through Patricia that he had two important things to say. The first, not surprisingly, was that he wanted to get out of his body and be free, but he needed our help to do that. Patricia explained that the vet would arrive soon and help him to do that, and he thanked us. The second thing was much as he wanted to go, he also wanted to come back and live with us again. He said he liked being a dog and hoped he could be that again, but it was okay if it was something else. In a year or two, we were to look into the eyes of animals until we saw the one that was him again.

For James this was getting really woo-woo; he wasn’t sure what to make of it. But he could see the merciful effect Patricia was having on Mac. There was nothing Age of Aquarius about that. The dog was focused wholly on her.

Those were Mac’s message in essence. Patricia also conveyed some very personal things that came from her. After a time I started urging her to go — she refused to accept any payment from us (it was a gift, she said, but I don’t know why we deserved it), and I knew I was not her last errand of mercy that day. Twice, though, Mac asked her not to leave and she stayed. Finally I convinced her she must go, which now I regret. The little guy might have appreciated having something he could communicate with directly when the end came.

An hour after Patricia departed, another soft knock came at the door. This was Dr. Lori Gibson, from an organization aptly named Compassionate Care, which performs in-home euthanasia. At the sound of her knock, Mac wagged his tail for the last time. Did he think it was Patricia returning? Or was he welcoming his deliverer, along with the plan for releasing him from his body as it had been explained to him.

Lori was indeed compassionate; she carefully explained what was going to happen. I held Mac (who was back on his bench now) and his back legs trembled — a revealing sign that could indicate fear, but more often for him indicated anticipation. Lori explained how one shot would sedate Mac, and when we were ready, the second shot would stop his heart.

We were there at the moment I had dreaded since he was a puppy —the moment of saying goodbye. But we had already said our farewells and expressed our love through Patricia. All that was left was the actual send-off. So Lori administered the shot, and just like that, Mac disappeared. All we had was the body of handsome old dog with no spark of animation in him.

Lori wrapped up Mac’s body in a blanket. She tucked in his legs on each end, so he looked like he was running. James picked up the body and carried it into Lori’s van and she drove off. We went back indoors, stricken and distraught. Our beautiful, soulful boy was gone.

We cried for hours, then got in the car with some food and drove out to Sauvie Island. Dark clouds fringed the foothills, and rays of sunlight burst through them at one point, the way they do in those old-timey images where the rays are meant to suggest God. We looked at each other and said “Mac.” We ate our picnic dinner near where the road ends on the island, looking at the birds skimming the water and talking about Mac.

Then we went home to face a house without him in it. Not physically in it, anyway. Ever since then I’ve been talking to him as if he were here. Don’t worry, he doesn’t talk back, but I get impressions of feeling from him, and derive great comfort from these “conversations.” You’ve seen TV shows where characters die and then their survivors keep on talking to them in subsequent episodes? Turns out that’s no metaphor.

The days since have been very, very hard. Most of our friends understand; they’ve been through this or at least have the empathy to intuit how it must feel. Some others, I am sure, think “what a lot of fuss, it was just a dog.” But I always felt Mac was not a dog at all, and was actually someone I’d known from somewhere else in the cosmos, someone who was just visiting me here on a prolonged stay.

We got to borrow him for a while, then we had to return him.

Do you remember the first season of Six Feet Under, from way back in 2002? A woman with a tear-stained face asks one of the morticians the eternal question: Why do we have to die?

His answer: To make life important.

Very beautiful. Thank you for sharing...

I have new canine in my life just as yours left. Wishing you & james the very best during this emotional time.

oh mead, thanks for sharing this. oh oh oh. my heart goes out to you.... and YES
i remember that exact Six Feet Under moment.
and
YES, i, too have had a kind of amazing experience of a pet coming back to live with me.
it's too long a tale to tell you here, but i will find your email and send it to you there.
in the meantime, YES
they are angels on loan to us and we do have at some point to give them back.
love
tracy

When TJ left us--she was the dog I hand-picked to be a part of our family when I was just 13--the thing that haunted me was going to my parents' house and not hearing her nails clicking on the wooden floors. And the killer was when I'd find find myself lying on the floor and not having her there leaning her head into my armpit as I gave her a good scratch.

What is it about inviting these creatures into our lives, knowing we'll (more than likely) outlive them, and then mourning their passings? The only answer I have is that I did it again just a few months ago, an adorable little kid. I said, "You & I will be together (hopefully) into my late-40s." And then I'll have to let him go and keep living. We CHOOSE this for ourselves. I think it's the closest you can get to a proof of the line you quoted from 6 Feet Under.

That, and I have to believe that, despite the ending, it benefits all involved in the interim.

Stay strong, sir. Me & TJ & Linus and (newly with us) Henry will hold you in our thoughts. Even if Henry's thoughts are dominated by "Ball!" and "Cat!" and "Food!"

I'm so glad you called the lady Mac communicated with. Thanks for your post.

Mead, I deeply regret not being there when my Mabel was put down. I haven't adopted a dog since. Mabel passed in 2006. Your process was and is beautiful. Take your time. There are revelations in grief. I think that's another reason we die.

Mead, thank you for this beautiful story. I was with my Max when he left his body, and I still miss him, but I knew it was the right thing at the right time. We are so lucky to have time with our animal companions. Even though the time is so short. All the best to you and James.

Beautiful and amazing. Thank you for sharing these experiences.

I'm so sorry about Mac. (Obviously, catching up a little late.) It is so hard to say goodbye to a friend. I am glad you feel your handsome boy's spirit still with you, glad to know he will come back to spend more time with you when and how he chooses.