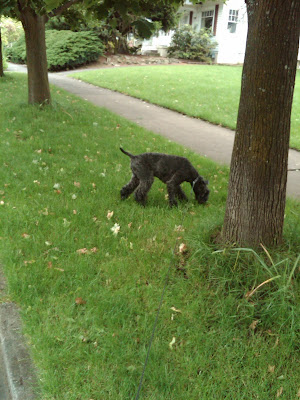 We always liked to refer to MacHeath, our Kerry Blue Terrier, as the Clown Prince, because his disposition was so antic. Fiercely independent, he only wanted to be touched when he was in the mood (though he was always in the mood for brushings). He let us know when he wanted to go for a walk, and to get him to eat dinner, you had to all but provide a menu and a fresh rose in a bud vase.

People always say you know when it’s time to put your dog “to sleep.” We didn’t know until just today, when we moved beyond certainty. During Mac's last few weeks, he alternated terrible days — seizures, mental confusion, difficulty breathing — with bright days when, though he was clearly an old dog getting older fast, he was still very much the tenacious terrier. Completely present mentally, still urging us to toss the rubber ring for him that had been his favorite toy since puppyhood.

Letting him go today was one of the hardest decisions of my life. But his leave-taking was as good as it could possibly be. An extraordinarily compassionate vet came to the house; we all sat by his favorite squirrel-watching bench together, James and I both holding Mac, as his last breath went out and did not come back.

In fact those were my last words to him. Goodbye, old friend.

Yet I guess I started my farewells last fall, when Mac’s terminal illness first came to light. At that time I inaugurated an odd form of spiritual exercise: taking the occasional walk around the neighborhood without him.

Don’t worry, he still got plenty of walks — three a day, sometimes more. But increasingly I was aware that our walks together were numbered. My solitary strolls were therefore rehearsals for a day when Mac would no longer be around to accompany me.

Today I realize how patently fatuous that exercise was. Mac’s shadow is everywhere I look.

This will always be so when I walk the familiar routes. During Mac’s blessedly long life, we had thousands of walks (eight years’ worth here in Portland) and countless car trips together. He lived for his outdoor adventures, and delighted in peeing on as many trees and shrubs as possible, scratching up the ground afterward in triumph. Up until just a few months ago, that dog still rushed from tree to tree like a kid on a Halloween outing.

I can only hope that in time my circumambulations and their constant reminders will become joys — celebrations of Mac’s long and happy life — rather than the sorrows they are now.

Mac was born in Pinetop, Arizona, the only male in a litter of three pups, the offspring of champions. His breeder, Kathy Bergen, was a devoted caretaker of the Kerry Blue breed; she put us through considerable correspondence and a couple of phone interviews before she was satisfied Mac would have a good life with us. And thus, at 12 weeks old, Mac undertook what must have been a terrifying adventure, leaving his first family to spend several clamorous hours in the dark hold of an airplane, only to wind up among strangers at LAX.

But he adjusted immediately to his new home in South Pasadena; he didn’t cry even on his first night with us. He astounded the trainers in his puppy classes by learning every command on the first try.

Among many favorite activities, Mac loved to ride in the car, and moving up to Oregon was a high point in his life. We came up three weeks in advance of James — Mac and I together on a journey that lasted two days and had several adventures. He was thrilled with it all: the dazzling array of new scents and sights, the constant forward motion. And he loved his new home in Ladd’s Addition, where he must have sniffed out every square centimeter on our first night there, when we wound up dozing on sleeping bags.
That following year I put a lot of energy into hunting for a permanent home, and Mac was a born realtor. Every new house held promise; he was as happy looking in the front windows and scoping out the back yard as he was inspecting the rooms inside. He was always a purposeful pooch who appreciated a sense of mission; unlike many dogs, he rarely liked to sit idly and just relax. He wanted to always be doing, much like a human being.

Until this past year, of course, when he probably spent more time asleep than awake.

With dogs as with humans, it’s natural to berate oneself for the ways things might have been better for them. I regret that we never got Mac a canine companion. We expect so much of our animal friends, and our major expectation is that they will automatically adjust to our ways. Mac was a bright, inquisitive dog who appreciated as much stimulation as the world could give him; if I could have a do-over, I would get him a pal from his own species, to keep him company during the many lengthy days I used to spend working in the theater.

Too late for regrets, though. There’s nothing left to do or say, except to reiterate:

Email ThisBlogThis!Share to TwitterShare to FacebookShare to Pinterest
Labels: Mac

This is a beautiful remembrance of Mac. He was a gorgeous fellow, and a top dog through and through.

I remain a fan of your work.

I am sorry for your loss. They just don't live long enough.

Again, my heart goes out to you.

I am so sorry. Mac was a good friend.

God Bless both of you. My heart aches for all of you. The three of you were the best you could be for each other. Joan

What a lovely tribute. I am so sorry for your loss. Mac was a great friend and a welcoming host whenever we visited. Peace - CA

you gave him a great life, filled with love. that's all you can ever do. RIP, puppy.

This is a beautiful tribute, Mead. Though you may have a few regrets, Mac was clearly very loved and lived a good life. I'm sorry you've lost such a dear friend.

Dear friends, thank you for reaching out, both here and privately. It is consoling indeed to know so many of us experience this unnameable grief.

It is with great solace
you're without malice
on the passing of
your longtime companion.

I hope you know,
where e'er you go,
like him --
you are a champion.

God Bless and godspeed
get what you need
on this passage to joy from sorrow.
Take time to mend
on the death of your friend;
mourn today, embrace tomorrow.

Respect the dead, regret the loss.
Celebrate the quick, at this grim toss.

What we've lost can show us
what we've had,
and remind us what we have.