There’s a moment in The Method Gun in which a character is being interviewed for a television show. To the host’s consternation, the guest is of the irascible persuasion, and isn’t much interested in sticking to the subject. The funny thing about television, she tells her host (and I’m paraphrasing) is that you only see what the camera wants you to. In the theater, everything’s all around you at the same time. She looks around the performance space. She look at the host, grinning like an imp.

She might have been describing the Rude Mechanicals’ entire aesthetic philosophy. Taking honesty in the theater to its logical extreme, Kirk Lynn’s script gives us a Foremanesque universe in which everything is on stage at once and the implicit promise is that all of it will be used some time very soon. Of course this extends to the titular gun, enshrined in a bird cage—an inheritance from the group’s acting guru, Stella Burden, who meant it to remind the actors that they could kill one another at any moment. 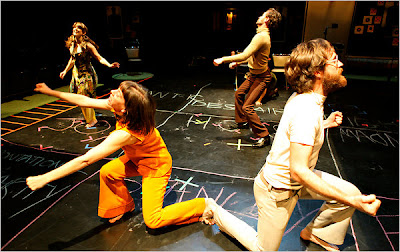 Unlike Richard Foreman, however, The Method Gun has a definite ubernarrative to tell, even if it’s buried in several layers of metatheatrical conceit. Essentially, Stella Burden disappeared nine years previously, and her students have been rehearsing A Streetcar Named Desire ever since. A very special Streetcar it is, since their exercise instructions were to work through the entire script without ever playing Mitch, Stanley, Stella or Blanche.

Everywhere you look, there is the entire evening in miniature. Whether it’s a menacing tiger (“Think how much better Death of a Salesman would have been if it were Death of a Salesman from Tiger!”), crying practice, or shlongendorfers held aloft by helium balloons, the play has something to say about how our sources of inspiration mold us into something entirely unexpected.

Because this is also about actors seeking the truth in their practiced art of pretend, there’s also lots of references to honesty and to realness. It’s fitting indeed, then, that the play’s stunningly beautiful ending comes from a tense sequence that’s as honest as it gets on any stage — since we’re genuinely scared for the actors, even while we see watch enact their spellbinding version of Streetcar (previously seen only in glimpses) in its fullest realization. This vision is such a coup de theâtre that I won’t describe it; I don’t want to blunt its impact for you when you see it yourself.

I’ll just say you’ll never see the Tennessee Williams staple quite the same away. And that I hope we see the Mechanicals again soon, with PICA bringing them back for subsequent TBA fests. The company is a national treasure, though the Austin-based company (whose town copped a “Keep Austin Weird” motto years before we adopted it here for local use) has a shape-shifting sensibility especially endearing to Portlandians.
Posted by Mead at 9/13/2011 10:30:00 PM

Of the performances I've seen so far, this one is top on my list. I enjoyed the entire piece and then then end.

No spoiler from me, either. It was unexpected and - dare I say - perfect. I would love to see this troupe again next year.

thanks Mead. This wonderfully captures the impressions of an incredible evening of theater. I'm still processing it. The images stay with you a very long time ...

I felt the same way, although you are much better at expressing it. I wish that I had gone to see this twice--there was so much to take in that I could have used another viewing to grasp it.