tEEth: a dance company with bite 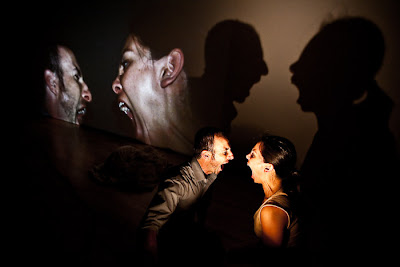 It’s high time I saw a performance by tEEth, the wildly popular dance company reprising its critical success Home Made in this year’s TBA Fest. Judging from the mob scene at Zoomtopia on Monday evening, I’m the last guy in town to find out about the company’s powerful work, choreographed by co-artistic director Angelle Hebert.

“Audience response is critical to the work,” Hebert said earlier this year, when she was awarded an Individual Artist Fellowship from the Oregon Arts Commission. “Something we hope for in every performance is to impact our audience in a meaningful, emotional, and visceral way.” How, exactly? “By creating juxtapositions in movement through displaced limbs or unconventional phrasing, I can investigate these extreme states — our inner beast and gentle nature, weaknesses and strengths, our light and dark side, et cetera.”

And that’s exactly what I saw when TBA presented Home Made this week. Some people like to compare tEEth’s disturbingly physical performance style to Butoh, but this is misleading; Hebert is much more interested in tension between humans than in grotesquerie. In the course of this performance, the two dancers, Keely McIntyre and Noel Plemmons, lead us on a constantly evolving danse macabre that evinces everything from plaintive appeal to outright rampage.

As the audience scrambled for seats on Monday, the stage was pre-set with what appeared to be a soft sculpture of a small mountain. But as soon as the lights went out, the “mountain” became lit from within. Its contents, projected on a back wall scrim, were a man and a woman cocooned within a pod, who began exploring each other’s face with hands, mouth, tongue — teeth.

Once out of the pod, Hebert used the figures as colossal shadow puppets at first, whose silhouettes alternately took on menace and tenderness. Plemmons and McIntyre soon moved from the shadows and acquired human dimensions, and thus their bodies also took on an alarming plasticity; they continually distended muscles and limbs to create unnatural postures (hence the frequent mention of Butoh, I guess). Most surprising of all was the protean nature of their faces; in dance performance, we are so accustomed to see performers whose expressions are perfect masks of impassivity, so it was startling to see facial structures molded into something so startlingly telling.

Equally important to the evening’s sense of dislocation was the music compositions of tEEth co-artistic director Phillip Kraft, whose otherworldly sounds — largely vocal — provided a sense of dramatic throughline. This was especially evident in the performance’s climax, a paroxysm of tortured emotions that called out for explosion but instead devolved into a sense of inarticulate loss.

Were the man and the woman worse off than ever at the end? Or simply starting over? Hebert and Kraft deny us any sense of narrative closure, but their gift to us is an evening of superheated emotion. If you tend to think of dance as a lovely, pastel cultural duty, not to worry — Home Made is the opposite of all that.

Thanks so much for covering so much of Portland on your blog....it makes me a little sad that I need a life. :) But great to know that Portland is still so awesome....even when I am not paying attention :)