Twentytwentytwenty-four hours to go: Mike Daisey’s All the Hours in the Day 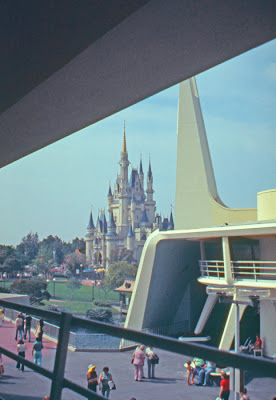 Getting into Mike Daisey’s epic, 24-hour monologue, All the Hours in the Day, was a lot of like boarding a really popular Disneyland ride. Long lines snaked all over Washington High School, and I passed FOUR checkpoints before even making it to the lines. On the way I got my left wrist stamped with a jack o’lantern image and a grey wristband affixed to my right wrist and my ID checked TWICE.

But Andrea Stolowitz, Kate Bredeson and I snagged excellent close-up seats and settled in for a good hard sit on ancient auditorium chairs. We were the lightweights, however; along the sides of the auditorium, along the first floor’s side exits, were the True Believers: people with coolers, folding chairs and sleeping bags.
And then it starts. Promptly at 6pm, words are projected onto an onstage screen: The Hour We Begin to Speak.

We all scream. And out comes Mike.

He sits at his signature wooden desk, a stack of papers preset there along with the water pitcher and empty glass we expect. Mike is still for a long time, peering into the audience as though mulling over what to say. This is prolonged. We titter. Still he waits. Then from the darkness that surrounds him on all sides, he extracts an bottle of vodka and a shot glass. Downs a shot. The audience cheers. The Mike produces a gun and lays it on the table. Nobody cheers.

Later on, Mike will assure us that both the vodka and the gun are real. And so the stage is set for a Chekhovian moment.

Before that, though, we are still waiting. The man who is going to spend the next 24 hours talking is silent. Finally, he opens his mouth and says:

There isn’t enough time to tell you everything you need to hear.

From there he wanders through a series of stories so crafted with such immense artifice that they appear to natural — which is to say, all but extemporaneous. Mike confesses he’s a very, very angry person, and we segue to the best friend of his teen years, Gibbs, and the stunts they would pull to vent their anger. Then we hear about a bad gambler whose face and body are riddled with “tells” that repeatedly give him away. (“He would have been a great actor,” says Mike, “but made a terrible gambler.”) The gambler had a brilliant but broken son, trained on the piano by Stravinsky himself, whose name was Warren Zevon.

For hours our man goes on, wandering into this odd vein and whatever dark substrata seem to occur to him at the moment — as in a sudden and apparent digression about his wife (and director) Jean-Michele Gregory has always had this astonishing memory, and recalls with absolute clarity friends, teachers, etc., from earliest childhood. And so skill is Mike Daisey that we forget what we came in knowing: that there are no digressions, and this man knows exactly where he’s going.

It’s all never not compelling. Like a novelist who knows how to end a chapter in such a way that you just have to turn the page to see what happens, Mike ends every 45-minute segment suddenly, arising and disappearing into the gloom and making you hunger to see what’s coming next.

In between each “chapter” are divertissements. The first is Holcombe Waller, who does a vocalise of a passage from a science fiction novel (not an inadvertent choice, as we'll find out). Later, not long after dawn, Nikki Weaver will guide the audience in restorative yoga. It’s all icing, of course, because Mike’s narrative skills are all-encompassing.

After some time, I’m tranced out. I go home and start watching the live streaming, and try to get to bed early, planning to return in the wee hours. But attempting an early bedtime never works for me. I don’t drift into sleep till around 1:11 am, and I'm in the middle of an extraordinarily vivid dream when the alarm clock goes off at 2. I reach over, turn it off, the next thing I know it’s 7:17 and I have a migraine headache.

Oy. I shuffle into the bathroom, take a triptan medication that guarantees I won’t be able to leave home all day. Discouraged, I cancel the ZipCar, wash off my Halloween tattoo and cut off my wristband. And turn on the live video feed.

But it turns out that being in an altered state is a great way to watch All the Hours in the Day.

Eerily, wherever I come into the story seems to be the perfect place. Early on in the performance, it happens several times that Mike describes a state of mind and says, “If you’re like that — like me — you know exactly what I mean,” and 10 hours into the show, I’m beginning to feel like the show has been written expressly to speak to me personally. Does everybody feel like that? In my own private magical mystery tour, going in and out of consciousness, I guess it’s only natural that my mind would seize on whatever seems to be of greatest moment. Even so, there is a lot about Mike’s narrative that sounds downright cosmic.

For instance. The lengthy and spellbinding sequence about a lucid dream of Jean-Michele’s (remember how Mike established her preternatural memory?) in David Bowie appears, playing Nicola Tesla, and gives her specific instructions. Which she acts upon. Mike delivers this sequence totally in the dark.

Dreaming is a frequently iterated motif on this sleepless night. Mike inveighs against society’s strictures and “how much we’re allowed to dream” — and goes on to castigate the arts and its artists for not dreaming big enough.

…and how our dreams are a big part of producing the “signs and sigils and portents” that shape human perception, which in turn shape reality -- are we therefore creating reality? “That can’t really be true, can it?” Mike asks, and the question is not rhetorical.

What is real, actually? Or to put it another way: what is actually happening? This will drive the narrative arc’s second half, in which we’re informed that there is no magic without sacrifice. Mike implores us to consider this. “You need to stop thinking about why things happen and start thinking about how. And I don’t mean how in the epistemological sense, but in the Jungian. Why are the symbols in your life -- of which I am one -- in your life?”

For me personally, the story’s philosophical dimensions are its strengths; I’m less interested in story per se, and this is what drives the event’s closing hours. All the same, it’s a great, great pleasure to be told a story really well, and Mike Daisey is always mesmerizing. This is even true — or maybe I mean especially true — when the story naturally comes to devolve around his own epiphanies.

“I am after all a monologist; my job is to draw attention to myself. My ‘tells' are everywhere,” he says, recalling his earliest accounts about Zevon Sr.’s failed gambling career. Mike story ends in Tomorrowland, underneath the Carousel of Progress, but we feel he has brought us up to the present moment. Twenty-four hours ago, we entered Washington High while it was still “today,” and now tomorrow awaits us outside.

Not that this decides anything. "There is not enough time," Mike says by way of conclusion, "to tell you everything you need to hear."

There’s one last sense of passage: Holcombe returns to the stage and sings a Warren Zevon song that graced Mike and Jean-Michele’s wedding. Followed by Holcombe, along with Sarah Dougher and many TBAers, singing “We All Need Somebody to Lean on.”
All the Hours in the Day is over, and so is TBA11. And I feel like I’ve lived through an extraordinary moment with hundreds of Portlandians — and others far and wide, thanks to the live feed — that will never be repeated.
Posted by Mead at 9/18/2011 05:22:00 PM