And now for something... 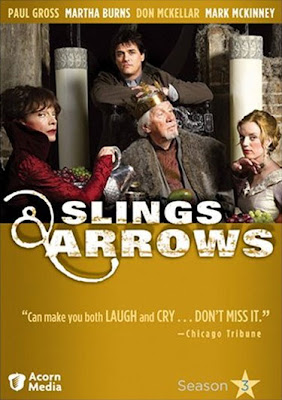 Tonight’s post was intended for the Dramaturgy Cabal, whose constituents have been big fans of a certain cult hit from Canada, but I feel a need to lighten up the joint after the decidedly late Octoberish gloom of my previous post.

If you’ve ever worked in the theater and somehow missed the fabulous Slings & Arrows when it ran on the Sundance Channel, the collected three seasons are currently on sale at Amazon. As outrageous as the show sometimes got, it never failed to be well-observed and wickedly satiric. For theater folk all over the continent, it was plain to see that S&A's episodes could only be written by bitter, bitter veterans of the wicked stage.

Yet here's the twist. As much as the show lampooned the foibles of playwrights, administrators, actors and especially directors, it always delivered on the goods by the end of each season. To show that ultimately all the satire was a love letter in disguise -- to the extended family that theater represents, and to the enduring power of live performance.

One of my favorite moments (among so many) comes early in the second season, when the New Burbage’s managing director, in a desperate bid to pinch pennies, announces that under the new “Austerity Plan,” everything will now be done by interns.

Email ThisBlogThis!Share to TwitterShare to FacebookShare to Pinterest
Labels: Slings and Arrows

See how my lower lip quivers? I have not seen this show. I really need to be adopted by someone with cable TV.

Note to Portland Pupu Platter Readers: Will rent space on your couch for a weekly batch of homemade cookies. (Particularly on Sundays at 10pm/9 central).

Okay, Mead - you must be the 100th person to say "Matt, you HAVE to see this." I think I know what will be on my Holiday wish list!

Season three was waitlisted on Netflix for MONTHS in Seattle, and when word got out that I had purchased the series, the theatre community there went bonkers! it was like I had acquired the world's cheapest crack, everyone was suddenly my best friend...

My favorite line, from season 2, is when New Burbage undertakes a new marketing and branding campaign, fearing their audience is dying off. The wonderful Anna, the associate managing director, bursts into Richard's office in an absolute fearful panic, crying out that "there are young people in the parking lot, and some of them have guitars!!!!"

Aw Yes, that was a good moment Cynthia. I loved it when the stage manager yells at all the actors at the party in the first season. Oh and when they bring that horrible director back after he's spent sometime in Germany...oh and...
I could go on and on. I love it!