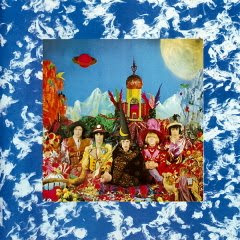 Whenever we go to a restaurant, my partner like to make a droll little game out of guessing what I’ll order. And damn it all anyway if he isn’t almost always correct. How does he do it? “Easy,” he will tell our guests. “I’m just look for the weirdest thing on the menu and I know that’s what he’ll order.”

I don’t mean to be contrarian. But the habit is long-ingrained. I first noticed it decades ago, because my musical self-education happened in isolation. Only gradually did I learn – for example – that it was good to be into the Rolling Stones except for the one out and out disaster of their career, the execrable Their Satanic Majesties Request (1967). Even my hippie roommate back then dismissed it summarily as “psycho-pukey!” And listening to it nowadays I can hear what we meant; yes, it’s a mess, a muddled mélange of tweetings and bleatings, but I love it precisely because of its excesses.

Plus my favorite Beatles song (after “Drive My Car”) is “Hey Bulldog,” how contrary is that??

Once an acquaintance severed contact with me for finding literary motifs in Patti Smith’s underrated album Wave. “What? You call that punk??” Well, no. Not then, not now, but somehow it spoke to me in a different way than her brasher, more consistently artful opuses.

Same with plays. Marat/Sade! How could you entertain such embarrassing twaddle! And The Fantasticks – now you’re being deliberately retrograde! And The Revenger’s Tragedy, well….now you’re just trying to be obnoxious.

Case in point: it’s true, I actually enjoy The Famous Life and Death of King Henry the Eight [sic]. As history it may be pabulum, but considered as a romance -- ! It has its moments.

And movies, don’t get me started. Let me just point out that in days of yore I was repeatedly bashed for loving The Big Lebowski (1998). How could I even refer to that blotch on the Coen Brothers’ otherwise sterling record! What a bumbling fumble, what a crass attempt to garner box office success. Now, of course, the movie’s been rediscovered and recuperated, and I am exonerated.

Time tends to be kind to true contrarians; as our recently departed friend said in a film: "I got vision and the rest of the world's wearin' bifocals."

And even if it doesn't, there's a certain perverse pleasure in loving something that no one else does or no one else does YET. ("Satantic Majesties" may be the exception, though "2000 Light Years from Home" is still a pretty cool song.)

I'm only about 15 years behind the curve on this one, but my new passion is "Loveless" by My Bloody Valentine, if for no other reason that, if you put it on in a room full of people, the majority will leave, grimacing like Harpo, but the few remaining will have this weird glazed look in their eyes, somewhere between ecstasy and fear, and kind of a twitchy smile playing over their lips. (You know who you are.) Then, when you know you got 'em, you say, "But wait. You haven't heard it loud."

You know what would be really contrarian? Fondle a female!

Slut. Not you, Steve.

Steve, I've been a huge Loveless fan since it was released. Welcome aboard!

(Not to derail the topic, Mead.)

Scott: Indeed, not to hijack Mead's topic, but thanks. Stone brilliant work. I recently learned to play "Sometimes" on the guitar, and I can't tell you how happy that makes me. (And how soon I'll be totally deaf.) There was just a story in the New York Times about a gig they reunited to play in NYC, and someone walking past the sound board reported the readout read 132 dcb during "Come to Realize."

Now back to your regular program....

Um, does your post about contrariness mean you're planning to vote for Ron Paul this November?

Perish the thought! There's contrarian, and then there's antiestablishmentarian.