Just flew in from Tilburg, and boy.... 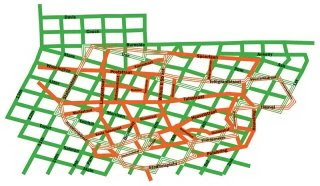 Tilburg, in the province of Noord-Brabant, is the sixth largest city in The Netherlands. Like Portland, it is home to bicycle boulevards, punk rock bars, public squares, and a vibrant do-it-yourself arts and music scene. For TBA:08, Khris Soden invites you to join him on a historical and cultural walking tour of the city core of Tilburg, and you won’t even need to purchase a plane ticket. The Portland Tour of Tilburg traces an exact route of Tilburg’s streets from about 9,000 miles away; Powell’s Books becomes Tilburg Central Station, Pioneer Courthouse Square rests on the Old Market, and the Bus Mall becomes the cultural heart of the city. Soden’s tour weaves a narrative of the two cities, bending the ideas of perception of place. After TBA:08, Soden will board a plane to Tilburg in order to conduct The Tilburg Tour of Portland for that city’s ZXZW Festival.

The above image shows the one city superimposed over the other. Nifty!

Part of the fun of this piece was the reaction of puzzled passerby catching Khris’ patter out of context – as, for instance, the moment when we stood amassed together in front of Portland’s most notorious gay bathhouse while Khris explained that in Tilburg this is the site of city’s wildest alternative music scene.

For an excellent account of what the walk was like, I can do no better than Megan Kate Grace, so I refer her to you.

I'm hoping to see this on Saturday along with the Tim Etchells lecture, Quizoola,and Superamas. Looking forward to coming back to Portland. I was there for the first time last year when I came up to see Gatz at the TBA festival.