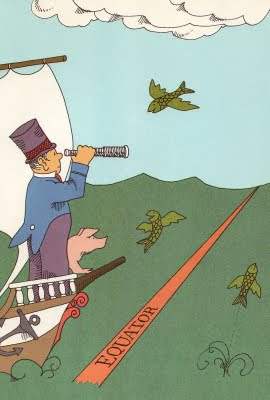 Do kids still read the old Doctor Dolittle stories anymore? Nowadays the tall tales of the kindly naturalist who could talk to the animals is better known through the movies: the lavish yet oddly dull Rex Harrison flick of the 60s, and later the even more diluted Eddie Murphy vehicles.

Well, prior to all that, I devoured the original books, by Hugh Lofting, when I was a kid. And though I outgrew them before I could get through all 12, I never forgot the lovely premise behind them all – a man recognized by creatures large and small as someone who could understand their languages and therefore help them in their need.

The Doctor’s talents came back to me last week, when I was desperate to communicate with my Kerry Blue Terrier, MacHeath. One early morning, we were out for his constitutional, and all appeared to be well; then suddenly, just as though someone had flipped a psychic switch, the poor dog underwent what I can only describe as a panic attack. Instantly he wanted to go home, and once home he crouched in a corner of the house, quaking and cowering.

A visit to the vet revealed nothing organically wrong, but at least I was reassured he wasn’t reacting to pain. An elaborate form of massage determined that. Blood tests revealed no alarming internal condition. Dementia? Again, none of the tests indicated that as the source of the apparent panic.

Sedatives seemed to be the only treatment, leading to a lessening of the tremors but also to a depressed, lethargic dog. Poor Mac spent days in a funk, refusing food and comfort. He appeared locked away in a private hell, unreachable. I felt helpless. And then I remembered a woman who worked for me during the Willamette Writers Conference who described herself as an “animal communicator.” Did she mean….a pet psychic? I went to her website to read about it, and wound up making an appointment on the spot.

And then I felt foolish about it. Was I grasping at straws?

The next morning I was expecting Patricia Schaller to arrive at my home when, to my astonishment, I heard Mac coming down the stairs – the most voluntary movement he’d exhibited in days. He went straight to the front door, and when I looked out I saw Patricia getting out of the car. When I opened the door, Mac ran down the front steps to greet her and bring her indoors.

Once settled inside, Patricia sat on the living room couch and Mac – not ordinarily an especially friendly pooch – jumped up and sat down next to her. She touched him with her open palm, and he melted – just spread out like spilt honey, and exhaled. The tremors stopped.

Patricia closed her eyes, scanning Mac’s body mentally and then listening to his thoughts for a while. Without hesitation, she told me that the problem was neurological and that it was concentrated in his lower back and especially in the right flank. Something wrong there was causing uncontrollable sensations (she hadn’t seen the shaking, mind you, and I hadn’t told her about it) and that Mac was terribly upset; he had no clue what was happening to him, and wanted me to make it stop. Patricia focused on an area she pinpointed as the main nexus of unwelcome sensations – the very area were Mac was seriously hurt in a pit bull attack a couple of years ago.

Then Patricia opened up a 3-way Q&A session, in which I could ask Mac questions through her and he could ask questions of me. Eerily enough, during this part the dog started directly at me the entire time. I’ve never had such a sense of communion with him before.

Ultimately Patricia urged me to go to DoveLewis so I could get a quick neurology referral, which I did immediately. Tuesday we go to get a doggie MRI, no doubt at colossal expense, but I’m glad things are underway. Meanwhile, Mac has shown steady improvement ever since his contact with Patricia. Currently he’s about 90% of the way back to normal; he’s relatively subdued, but no shaking or quaking!

If this sounds too woo-woo for you, well….I understand. But I tell you, that dog of mine recognized Patricia as his own personal Doctor Dolittle, and the contact gave him the confidence to trust that people were trying hard to get him the help he needed. If you have a health issue with an animal you take care of, or even just want to hear what s/he has to say, I urge you to contact Patricia. I look at Mac now completely differently. And I hazard to say he feels the same about me.
Posted by Mead at 8/23/2009 03:15:00 PM

I guess this shows where dogs lie in my scheme of things, but this is my favorite of everything you've ever posted, Mead. Go Mac!

This post is amazing & timely. I had seen Particia on a local morning show & made note of her website, but then decided against it. I have 2 Jack Russells that are rescue dogs. One had been tied to a tree for a year...needless to say, they both have "issues". Because of your post, I am going to use her.
Wishing you & Macheath the best.

An amazing post, Mead. Thank you for sharing - and for being a man of such incredible intelligence and sophistication who is also willing to dive into the unexplored and outer realms of our human understanding...

Best wishes to Mac in his recovery.

Mead: I have to agree with Scott (below)--I've enjoyed your blog, and can't deny the narcissistic glow that I get when you've praised my writing--but this is far and away my favorite entry.

I am the least "woo-woo" person out there. But I also know that I commune with my dog on a level that I can't decipher in my limited, logical way. You've made me think about a new approach to (my dog) Ripley's seizure disorder and thunder phobia. I send love to you and Macheath.--Drukman

mssr m,
brilliant to follow the uncommon sense.
hallelujiah.
i've a gal in western mass. who has been consulting with me about every manner of animal pal for the past eleven years. those who know how to do this really know how to do it. and we are lucky for their skills.

all love to you.
i've been sending you little secret hulloes...
xo

Dolly, and that darling blue Mac. I hope he's doing better now. I've been thinking I need a pet psychic. My goddam puppy, Little Creature, keeps peeing on my bed, and barks so much my landlord is trying to insist I get him a no barking collar that sprays stuff in their face when they bark!