Get thee behind me, Summer

O, thank you, St Michael and all your archangels, for getting us at last to the end of the summer TV doldrums. True, I’m grateful to Bravo for tiding us over with Top Chef Masters (which, surprisingly, turned out to be more fun than the regular Top Chef franchise), but otherwise……it’s been a desert of delayed gratification on the smallish screen. New episodes of the formerly de rigueur but now ineffably tedious Entourage don’t cut it; that show jumped the shark years ago.

Big Love, alas, just started filming, so you have to wait till early 2010 for the return of everybody’s most memorable Mormons.

Only through the thoughtful ministrations of my BFF – otherwise known as TIVO – did I get through the dog days. A couple months ago, I awoke one day to discover all 35 episodes of In Treatment singing to me from the TV room. Immediately I started rationing myself, planning my lunchtimes around taking just one session a day with the therapist with feet of clay, Paul Weston, played by Gabriel Byrne.

As absorbing as the first season was, season 2 turned out to be better. Of particular interest to me was the storyline involved Mia, a former patient of Paul’s who return to therapy with some unsettled scores. Hope Davis turned in a profound performance as the rare client who actually gets somewhere during her sessions – eventually – thanks to a quiet and unexpected epiphany. Expect Ms. Davis to get an Emmy for the role, on September 20, for Outstanding Supporting Actress in a Dramatic Role. (She’ll compete with Dianne Wiest, also nominated for her role as the therapist’s therapist.) 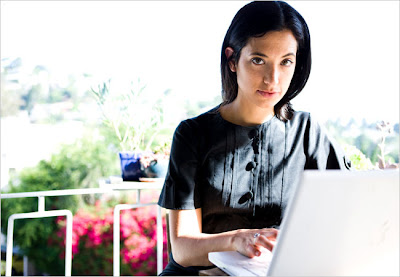 Cable shows are very well represented this year in the Emmy nominations, and it is no accident that many of them are exceptionally well-written. HBO in particular likes to hire playwrights to write their shows, and the playwriting sensibility is highly evident in their finest series. Sarah Treem, whose play A Feminine Ending did so well at Portland Center Stage a couple of years ago, was a major influence on the first season of In Treatment; her hand was equally evident in season 2, when she was joined by such notable playwrights as Jacquelyn Reingold and Warren Leight. (Jackie wrote the Mia sequence, in fact, and had a cameo role in one episode as half of a squabbling couple.)

Big Love can boast of playwrights Melanie Marnich and Roberto Aguirre-Sacasa; over at Showtime, Rolin Jones puts those wacky pothead on Weeds through their paces; and on network television, Bridget Carpenter writes for the much-lauded yet reportedly underwatched Friday Night Lights. The list goes on and on. Yet all these writers are still penning plays. “I won’t be writing for television forever,” Bridget said awhile back. “I have every intention of keeping my playwriting muscles in shape.”

Thank you for that, St. Michael. But in the interim, the injection of playwriting talent into ailing TV land is welcome indeed.
Posted by Mead at 8/13/2009 11:00:00 PM

I've been impressed with True Blood, Weeds and Nurse Jackie too. Strong acting as well as writing. Definitely looking forward to Mad Men this Sunday though!

Thanks for letting us know about playwrights who work in TV land. Yes there are a lot reality trash drek but there are some good shows written and acted by topnotch talent. TV continues to create more opportunities for women and people of color than film or dare I say it...theatre?

I am making my way through season one of True Blood... & under the new austerity program, I am thankful for Top Chef, Project Runway, another season of So You Think You Can Dance & the upcoming-GLEE.
Mad Men is my favorite TV show ever.
Interesting comment about nabbing new playwrights for TV series.

True Blood has been more audaciously trashy than last year, which has been a delight.

Nurse Jackie and Hung have both been great summer relief. I have loved watching Merritt Weaver from JAW 2007 (Story About a Girl) on that show.

I also was glued to So You Think You Can Dance...yes, I admit it...I love that show, but have not yet jumped off the cliff as Gary Norman has..he sees the tour every year when it comes through Portland. Love it!

I have never watched Mad Men. We just finally began Battlestar Gallactica on Net Flix. It has lived up thus far. I should add Mad Men to the mix.