"The choir has a lot to think about." 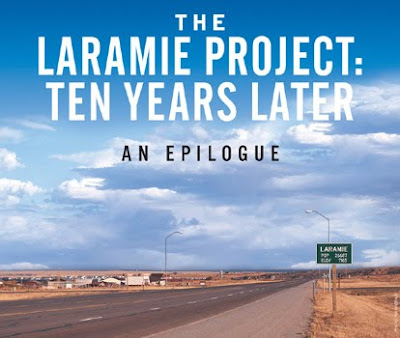 You remember ground-breaking play The Laramie Project. The original production, as created and performed by the Tectonic Theater Project, was a high watermark of my life in the theater. In the hands of less sterling artists, a play dealing with the brutal and inhuman murder of Matthew Shepard could have been a lachrymose screed. But this company, under the direction of Moisés Kaufman, was astounding. By interviewing people of all stripes in the Wyoming town about the aftermath of the murders, the company’s composite portrait ultimately affirmed my faith in humanity, when it could easily have ratified a more misanthropic view.

The play’s presentational style was thrilling, too, since it proved that a documentary style of performance could also be great theater.

How could it already be a full decade since the murder that sparked the project? Eleven, actually. Somehow it is, and Tectonic has created an epilogue: The Laramie Project: Ten Years Later. It will be read tonight at Lincoln Center and simultaneously all over the country in all kinds of venues and communities -- over 150 in all.

Portland, I’m proud to say that is participating in multiple locations, with at least five different readings going on that I know of. I’m going to the downtown hearing, presented by the New Century Players at downtown’s Newmark Theatre (at PCPA) with a team that represents a spectrum of local theater, including Stan Foote, Rose Riordan and Scott Yarbrough in the large cast.

Many of tonight’s readings are free; the one I’m attending is a benefit, with proceeds being donated to community action groups. Of course I want to support that, but beyond that, I want to be in the midst of other theater folk when I revisit an event that is so emotional for me.

And you know what about that? So what if this is preaching to the choir. I’m tired of people using that expression as an excuse for not participating. Anyway, as Tony Kushner has said, the choir has a lot to think about.

_Just showing up_ is fundamental. The people who show up are the ones who get things done.

And who is it that shows up? The choir. So yeah, who cares if it's preaching to the choir. The choir are who will go out there and change the world.

We will be there.