Tracy Letts is personally responsible for much of the sass I’ve gotten from playwrights in recent years. For decades I’ve said: look, there are a few simple “don’ts” you should follow if you want to be produced. These include:

Then along comes Steppenwolf and Mr. Letts and August: Osage County, and Q.E.D., come to find out this form, like any other, can be electrifying in the hands of exceptional talent. 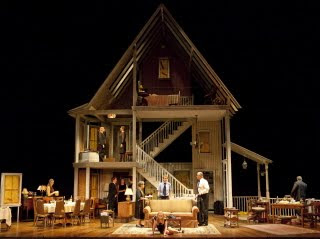 Which is not to stay that plays that require 13 actors are any more producible than they used to be. (It will be telling to see how many regional companies slate the play for their seasons once the rights are available.) But can this kind of theater (realistic, sprawling, etc.) still speak to us? Oh yeah.

Now August: Osage County has come to Portland, as a whistle stop in its national tour, to roost for five days at the cavernous Keller Auditorium. Which amounts to a fresh test for the Pulitzer-winning juggernaut. Does the venue swallow up an intimate drama? Will people go to the Keller, which is more often associated with shows like Camelot, for a no-holds-barred drama? Yes and yes.

Tonight’s run was well-attended and warmly received, notwithstanding the Keller’s sound problems. In Act 2 especially, when the family matriarch (played in full-out, pull-no-punches style by larger than life Estelle Parsons) lets the family weaklings have it, the Weston family’s shenanigans are breathtaking. 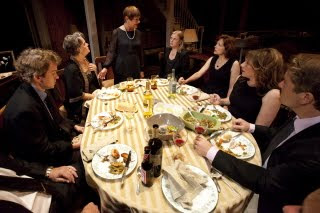 The outstanding cast (which includes two former Oregonians, Laurence Lau from Lake Oswego High and Paul Vincent O’Connor, formerly of OSF) shines. But no one outshines Estelle, who gets to offer up as vile a cesspool of botulism as you’ll ever see. Or ever wish you’d thought to say yourself. It was great fun tonight to hear some people gasping and others laughing out loud…all at the same lines.

Take note: Portland’s share of the national tour is brief, playing only through this Sunday, October 25. And unlike Camelot, this is one show where you’ll be glad you ponied up for the orchestra seats. Not all the play’s significance lies in its words; you will want to see these characters’ faces.
Posted by Mead at 10/20/2009 11:58:00 PM

I saw in in NYC with Phylicia Rashad & I thought it was brilliant. I grew up on this kind of theatre. My first non-musical as an actor was Ah, Wilderness! at 13yo & I have loved the 3 act ever since. I love that there is a revival of The Royal Family on Broadway... it is a favorite.
The Keller would be a tough house for this sort of play.

saw it in ny, - ms. parsons will kick your ass.
and we all need a kicking like that.

I just saw it in SF with Estelle. She still scares me. I remember watching her in Bonnie and Clyde and being really irritated and disturbed by her (I was maybe 12 when I first saw it as a late night movie). She and Gene Hackman practically walk away with that movie every time they're onscreen.