Excited as I am to be going home today, I have to admit it was sad leaving the theater for the final time last night. Walking along the banks of the Iowa River, watching the black water flowing languidly by, stopping on the bridge to look at where the river curves out of sight, looking back to the theater lobby still mobbed with thrilled attendees – I’m going to miss all that.

Since I last wrote, I saw Lisa Leaverton’s new piece, One Plum. (Lisa’s play Why Love Doesn’t Recognize Its Name appeared in PCS’s Now Hear This series a couple of years ago.) Plum transformed one of the university’s several theaters into an amazing environment representing – well, the environment. The actors of One Plum created a visual and aural landscape in and around the audience that took us rapidly through season after season, reflecting issues along the way such as climate change and pollution. Nature’s hurly-burly (and humankind’s part in altering it) was treated comically but pointedly, the main spines being a human’s couples attempts to reproduce themselves and the struggles of a colossal plum tree to bear fruit. Incredibly inventive and ever-morphing, the experiential nature of the piece was a delight. 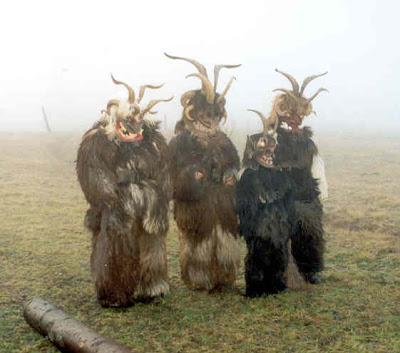 As if in response to One Plum, the next day’s reading of a new Andrew Saito play, The Patron Saint of Monsters, also looked at some of nature’s side trips as manifested in human beings. Its first part chronicled the making of an actual medieval saint; part 2 explored her elevation to cult status. And in the final section we see how she became associated with healing and/or comforting misfits of all stripes – while simultaneously displacing the more pagan “monsters” already around. The photo above shows you a gaggle of schiachpercht, the indigenous folk who don't cotton to the Christian incursions.

Following Andrew was a new play by Tali Ariav, Bloodlines, a harrowing duologue between a hospitalized girl and a soldier who may or may not spring from her fevered imagination. I was so shattered by this play that I left the theater even as the applause was in progress to go outside in the dark and just be with the experience of the play. (And nearly missed that night’s adventure of hanging out at The Sanctuary, a theater speakeasy that was popular back when James was a student at U of I – something reassuring about that.)

Friday night was Joe Luis Cedillo’s new play, Columpio. If you can envision Arthur Miller’s family dramas translocated to a Chicano family living near Newhall in the 1990s, you’ll get a sense of how Joe’s play works. Spanning three generations of increasing assimilation, with all the credits and debits that implies, this was a deeply felt portrait of a family in crisis. I hope this play gets produced soon in Los Angeles, where it could be a watershed piece of theater.

Saturday we were treated to brunch at one of the playwrights’ home – a 14-acre farm with sheep, goats (we got to feed goatlings less than a week old), and disturbingly large hens. Plus bovines. The place sported a gargantuan barn and a gorgeous farmhouse that date back to the mid-19th century. This playwright, Janet Schlapkohl, scrambled eggs for me at one point that she had just taken from the henhouse. Let me tell you: fresh eggs are light year apart from what you get in the supermarket. These eggs were so flavorful that they needed no seasonings. And yellow…

We returned to see Janet’s play Tro Musikk, a warm, big-hearted piece about upper-Midwesterners suffused with Scandinavian culture and inflected with those charming accents and quaint expressions (“you betcha!”) that we associate with cheese country. Not that the play mocked those people or that part of the world; on the contrary, I wanted to move in, to love among them from now on. I loved every minute of this play. Laughed like a macaw throughout, only to be surprised and touched – frequently! – by the sheer humanity of the characterizations. Even though the play is framed by the supernatural (troll-like figures lurk in the moods and grin at human foibles), ultimately the play was about forgiveness and redemption. Yes, the big themes. Powerful stuff. Which is easier to get your arms around when you’re accompanied by an accordion.

The Festival crescendoed last night with the premiere of Achilles, Scourge of Man, an outrageously rock and roll spectacle about the famous warrior that seem to happen now and back then and throughout time. As with One Plum, the theater was transformed for the occasion. Powerful lights beamed down from the top of the theater, filling the cavernous space; searchlights continually scanned cut the audience; the sound of helicopters approached and receded. So once again, to enter the theater was to enter the play. Tricked out with video screens, supertitles and a rock score that shook the risers, this was a balls-out production effort that grabbed me by the throat and demanded (and got) my attention every minute of the story.

As outstanding as the production effort was, however, it would not have mattered had Kevin Artigue’s script been any less provocative. This writer knows how to assault his audience with language, but also how to drop it down to a whisper, and when to provide the palate cleansers that let you savor new sensations. Indeed, “sensation” is the perfect word for this work, which had lots to express about men who treat war like an epic video game. (Kevin has worked with the brilliant Ken Roht, by the way, whose seemingly reckless extravagance informed this play.)

Like I said: a terrific year for the Playwright’s Workshop’s New Play Festival. I got a great glimpse into where theater may be headed. And I’m encouraged.
Posted by Mead at 5/09/2010 07:32:00 AM

Email ThisBlogThis!Share to TwitterShare to FacebookShare to Pinterest
Labels: Iowa

Anthony Nelson, director of Achilles, appreciates
Mead's comments about the play and the acknowledgement of the writer, wouldn't of happened without the passionate work Kevin,

Looks like the rest of that message got lost in space, Anthony, but I'm glad you commented. And it's funny you did, because I had wanted to acknowledge you personally in my post. I did not only because it was already a long post, and I didn't want to get into a thing of attempting to credit everybody, so I focused on the writers. (Yep -- the directors get the shaft once again!)

Yet in the case of Achilles especially, it was clear that the director (that's you, toots) collaborated fully with the playwright, resulting in a production that may never be performed exactly that way again; it was a superb marriage of form and content. I really hope you two can work on this amazing play together again. It be awesome to take what you learned from the Iowa effort (extraordinary as it was) and apply that to a new version.

Congratulations on creating an unforgettable piece of live performance.

hey there, Mead. just read your words for the first time since. how are you. miss you. Tali.