This Sunday, a celebrated event comes to a close here in Portland -- Portland Playhouse’s production of August Wilson’s Radio Golf, which has enjoyed a mostly sold-out run, in an excellent co-pro with the new BaseRoots Theatre Company. If you’re really, really lucky, you might be able to snag a ticket for this weekend and see what the fuss has been about.

In case you don’t make it, let me fill you in. August’s last play was widely regarded during its premiere runs (2005-2007) as latter-day Wilson. But its original director, Timothy Douglas, once told me that the day would come when it would be extolled as one of the playwright’s best works. Well, that time may be now. In an act of canny self-criticism, Portland Playhouse -- which occupies a former church in a marginalized neighborhood -- decided to mount a play that pits self-interest against deferred gratification and asks us to tally up the costs of progress for its own sake as opposed to preserving or restoring what we’ve already got. 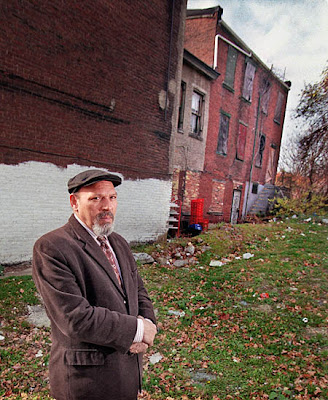 Though like most of the 10 plays in August’s Century Cycle, Radio Golf is set in Pittsburgh -- specifically that city’s Hill District (where the playwright stands in the photo at right) -- attendees at the Portland production’s many talkback sessions have marveled that the play wasn’t written expressly for our own town, where issues of gentrification are rife. Plus this production was serendipitous for me personally because I already had it on my syllabus for the Delve course I started leading just this past Tuesday.

Delve, by the way, is the umbrella term for the reader's seminars offered through Literary Arts. These are devised as group explorations of literature; I’m not a teacher, but rather a “guide”; there are participants, rather than students. An ecumenical conception! When Jen MacGregor approached me about choosing something to delve into from dramatic literature, August -- a man I’d known in my grad school days, when his first plays were being developed and produced at Yale Rep -- was the natural choice.

Each seminar meets only six times, so I had to be selective about which of the 10 plays to exclude. But I knew from the start we had to end with Radio Golf. And thanks to Portland Playhouse, we really begin and end with the play, since virtually the entire class attended this remarkable production.

The seminar is a discovery process for me, too. Back in the day at the New Haven canning factory, some of us took August a little for granted; he was a journeyman artist, we assumed, just as we were. After all, not only did I see some of his early works’ premieres, I actually edited and did the layout for the first published editions of two of them. It has taken me 20+ years to see that just because I caught some typos or smoothed out prefatory material didn't make the plays were less effulgent. Now certain plays in particular -- Joe Turner’s Come and Gone, for one, and Gem of the Ocean, for another -- appear numinous, and all the more startling because their startling spans of human experience seemed housed within conventional dramaturgies. Yet for all that, they still shake your soul.

Now I'm looking forward to Tuesday evenings. Because I can’t wait to hear what my fellow travelers discover each week at Delve.
Posted by Mead at 5/14/2010 11:17:00 PM