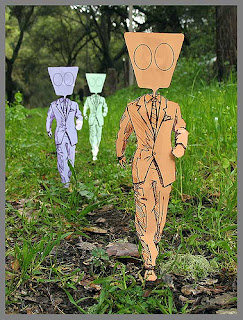 Is it something I said?

Maybe it's something I fail to say. Or the way my blog postings are worded, or perhaps they're just not compelling enough to invite comment. I know from the site meter that people arrive and depart from this virtual Illyria, yet only rarely do they feel moved to leave behind some trace.

Sister Michael Anthony always used to say that comparing yourself to others is fatal. But I can't help but be a bit jealous of those colleagues o'mine whose posts always inspire a few responses, and occasionally -- as in the case of Blogger Extraordinaire Prince Gomolvilas -- elicit long chains of reaction.

Okay, bad example. I just visited Bamboo Nation (Mr. G's aforementioned blogolopolis) and noticed that it is ineluctably fascinating. But what about the blogs of certain friends who detail the most quotidian of their doings and average several comments per posting?

You say: hey Dr Phun, how bout a little whine with that cheese, and of course you're right. But to brandish another cliche: I just want to be loved, is that so wrong??

So I ax you. Allow me, for once, to solicit your comments directly. What am I doing wrong? You're the only one who can help me, Obi-wan. What excites readers' interest enough for them to reassure me I am not all alone out here?
Posted by Mead at 12/15/2007 03:21:00 PM

Aw, Mead. The measure of a person's blog is not in how many comments are left behind. I, too, suffer from 'Blogger's Ennui,' and become discouraged when more people don't leave behind some record of their passing; but what we both have to understand is that many people don't want to leave their thoughts behind - they're just too personal. Or they do, but they want to think about it some more, and then they just forget amidst the flotsam and jetsam of their daily lives. Or commenting is just an unfamiliar concept to them. After all, you don't leave comments in magazines. Or books. Or newspapers. Why would you do it online?

Then again, some people also just suck. There is that too.

The point is, I don't think it's you. This is such a strange, voyeuristic literary medium we work in. Not everybody wants to be caught watching.

There. Long-and-involved enough for you? ;-)

Did you know "PW" is LitMan shorthand for playwright? O yes. Don't tell I told you, though.

Heh. That's something I wonder about too (considering you and I started our blogs around the same time, Mead...) Perhaps it's because your writing has such a high level of flair, people get intimidated and don't want to leave you a comment that just says "yeah, cool, I agree." They'll think you want something more intelligent than that. Maybe it's the same case with my kinda-highbrow blog.

Incidentally, I got my most comments when I wrote about Jane Austen. Everybody likes Jane. Not so many people care about French composers or the finer points of playwriting...

Mead, am I to glean from this post that I will never escape that constant need for approval? Until now, I held onto one last ray of optimism. I truly believed that someday I'd be good enough, smart enough and gosh darn it, PEOPLE WOULD LIKE ME.

O Mead, o sage, perhaps it was high time I sent this notion to Elysium. Surely the resulting self-flagellation was feeding my oh so glutenous neuroses (the selfsame neurotic habits which sometimes prevent me from taking a few moments to add my two cents to Interweb-based questions or topics that stop and make me go "hmmm").

I enjoy reading your thoughts here and I appreciate your very thoughtful comments on my blog. (More often than not, you're my sole source for commentary!) The least I can do is return the favor and add a bit of flavor to your Pupu platter.

Truth is, sometimes I am intimidated to leave a comment on writer's blogs. It's silly, I know, but we mere mortals often feel the need to prove that we too, can turn a clever phrase or pick out the perfect adverb from the shelf at Lolly's. So instead of just saying, "hey I like what you wrote." "or, that's thought provoking" or "this sucks" we just say nothing. But know that we are out here, and we are reading. CAW

O, thank you, CAW, and Marissa and Patrick and k.crow. This is great. I should execute desperate bids for attention more often. I've also gotten private notes (why private, one wonders) essentially relating that all bloggers feel the same way.

Which is edifying. Especially if I ignore the fact that popular, lovely and talented blogomaniacs like Prince and Ellen M are AWASH in commenters, but never mind, never mind....

Aside to k.crow and CAW: crows are a totem animal of mine, and I used to ascribe special significance to a visit from one. What does it mean that now I see them daily (my house is surrounded by pines) and I am never without them? I have a basin-shaped rock in my front yard, and the crows will stand next to it reproachfully until I fill it with water.

Your home is obviously a good habitat. Crows are smart birds and they establish their communities in prime real estate.

I've come across a lot of people who really connect with crows.

Wait a sec... Ellen has a blog?? I need the address to that.

Oh, Mead, I gotta tell ya: the need for blog readers' acknowledgment and approval never goes away. I, too, watch my site traffic and am actually struck by the disproportionate amount of people who read and who don't comment. But I think about all the times I read something online, enjoy, and never comment on. It's not something people really do, I suppose. Sometimes there's just nothing more to add and saying "I like your writing" just sounds a bit stupid. Also, I think it's a generational thing. I think younger folk are more prone to leave feedback. It's just something they do 'cuz they're so used to this thing called the Internet. So unless you start writing passionately about High School Musical, you're not gonna find the kind of massive reaction you speak of.

If it's any consolation, I check your blog a couple times a day, just to see what's happening, and, of course, to read that witty Mead prose.

I'm continually surprised when someone feels moved to comment on my blog (and amused that the post that recently elicited the biggest response featured a big picture of a martini). I do get a kick, however, out of looking at the number of readers and seeing where they're from. There's some kind of weird thrill knowing someone in Switzerland is reading your blog.

Fear not...I'm sure you have plenty more readers than commenters.

Indeed, Ellen has TWO blogs. One you can access from our top secret PlayGroup blog, the other....is so secret that even we cannot pass through its portal.

I don't even know who Ellen is, and I want to read her damn blog. Give it up!

OK Mead, I must admit to being one of those lurking entities that have read sans comment. I've often thought of leaving a comment, but then... And now I must admit I do that on many blogs. My brother-in-law Paul has frequently given me shit about never commenting. So I guess this is kind of a 12-step response to my lack of commentary acumen. "Hi, I'm Shelly Lipkin and I'm a Blog Lurker.

I read; I enjoy; I come back for more; but if I have nothing to contribute, I don't comment. And I doubt I would have it any other way, since I don't want to waste my time reading vapid and vacuous "yeah, what you said" drivel.

And being relatively new to the blog-o-sphere, I don't see blogs as a highly conversational medium, like (personal) email, phone, or face-to-face. So I'm also not predisposed to comment.

Prince Gomolvilas visited my blog!! That's just like having a celebrity sighting right in your own home office. Awesome!

Thank you all for taking a moment to respond to this post. How kind of you to visit me in my wicked loneliness, to borrow Margaret Hamilton's immortal nasal twang. And Shel, you are welcome to lurk all you want, there's nothing wrong with that.

As many of you have noted, including k.crow and Prince and the nameless poster from NY, I've concluded that for most people, comments or responses don't usually feel like they're called for. Though I hadn't thought of this until aNYanimus mentioned it, the blogosphere would turn a lot more slowly than it does if everyone responded to every post with some sort of acknowledgment.

Now: I comment of people's posts all the time. But that's because I'm a compulsive maniac. I'll try not to expect the same from everyone else, and be content to cozy up to my site meter on these dank Portland nights.

I knew it: you were about to call the police.

Here are a few more reasons that I usually don't comment, some of which were mentioned by others.

It takes time to write well, and blogs are forever -- who wants their sloppy screed preserved in the amber of the internet?

The bar is set pretty high -- you (and many others) blog so well -- casual comments can appear petty and pedestrian.

So, why these comments? Because you asked a straighforward question, and deserve a strightforward answer. It's my quid (two cents, really) for your pro quotes.

And, joy of joys, you rewarded your responders with comments (who doesn't like recognition?) -- yes, even micro-writers like myself brighten when our tiny contributions elicit a reponse.

So, do take comfort in the visits, even if most of your visitors are mute. And if you need feedback, guess you'll really have to ask for it.

Ah, but dear commenter, you surely undervalue your contributions. Quid pro quote?? LOVE IT! And will borrow it at the earliest opportunity..... Also, though I totally understand what you mean, I doubt too many people are concerned about expressing themselves well in print. For me personally, it's very difficult to speak out loud -- I stammer, collapse words or leave them out altogether, and otherwise fail to communicate standard English -- which means the written language is a natural recourse. So it's the exchange that's of value, not its literary quality.

Thank you for your observations. You are always welcome to visit, but I do hope you'll continue to be inspired, occasionally, to treat us to your thoughts as well.

Well, I'm rather taken with the idea that we writers are all just so handsome, brave, and wise that readers too are intimidated to leave comments. I think I'll stick with that rationale (as opposed to the option that no one really cares).

[Ironically enough, the handsome, brave, and wise author removed the original post due to a stupid grammatical error.]