Okay, I realize that when noted author, actor and snarkateur Patrick Wohlmut exhorted me (via my own tag board, mind you) to come up with a fresh post, what follows is not what he had in mind. But it's what I've got: the first review in of the new PCS adaptation of A Christmas Carol, adapted by moi-meme. 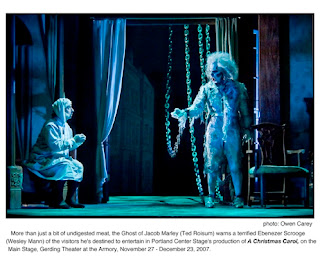 The always perceptive Rich Wattenberg is generally positive in his review, but his demurrers tear at my heart because.....I know he's right. Tech difficulties plagued the preview process up to and into opening night. EmbarRRRrassing! But they seem to be behind us now, knock on virtual wood. Anyhow, the behemoth is open at last. And anyhow, audiences seems to be loving it. And I'm tickled to be praised in the critical press for "eschewing syrupy sentimentality."

We know that "Nutcrackers" wait in the wings. And "Messiah" rehearsals are sending Handel soaring to the rafters. And various other seasonal stocking stuffers are coming, too. But this weekend, the first major holiday shoe dropped, in the form of a new version of "A Christmas Carol" at Portland Center Stage.

After a six-year hiatus, Center Stage has returned to the classic Charles Dickens story. Adapted by Mead Hunter and directed by Cliff Fannin Baker this year's dramatization of the novel is very different from the spare David McCann version directed by Center Stage artistic director Chris Coleman in 2000 and 2001. Spiced with loads of holiday music and magical theater effects, this production has its rough edges, but it's plenty of fun.

Although more traditional than the McCann version, Hunter's script eschews syrupy sentimentality. Offering a brisk, clear telling of the story, Hunter's adaptation will please viewers of all ages. Certainly, moments of the current production touch the heart, but a playfully good-spirited, often broad humor is its distinguishing feature.

In the role of Ebenezer Scrooge, Wesley Mann skillfully sets the tone. A little, jowly fellow, Mann's Scrooge quickly -- perhaps too quickly -- changes from the unpleasant, stodgy miser of the early scenes into a mumbling, bumbling, likable old man once the Christmas ghosts begin to appear.

The Ghost of Christmas Future's ominous warnings to Scrooge may not create much dramatic tension, but the dear old chap's dancing, prancing joy at the discovery after his night of strange visitations that he still has a chance to change his ways is delightfully entertaining.

A talented cast of actors adeptly creates the host of colorful characters who people this Scrooge's world. Tim True is fine as the gentle, well-meaning Bob Cratchit, and Ted deChatelet ably portrays Scrooge's patient and loyal nephew Fred. Ted Roisum's ghostly Marley is amusingly eerie both in appearance and sound, and Todd Van Voris is fun in a variety of roles.

Several actors, including some of the company's youthful performers (who all wonderfully hold their own in this production), work well together to give us a spooky, but not too spooky, Ghost of Christmas Past. Perhaps most fun of all, however, is Julianna Jaffe's jovially over-the-top, operatic Ghost of Christmas Present.

Rick Lewis' musical compositions and arrangements capture the holiday spirit and provide splendid aural support for the play's unearthly happenings. With respect to those happenings, this production depends heavily on well-engineered scenery and stage effects.

Sure, Scrooge's shop may seem a bit cramped, the high-flying Christmas Present may seem to have a bumpier ride than necessary, and some of the actors may occasionally be seen scurrying about in the wings, but such flaws hardly disturb the evening's merriment.

So, I'm curious, Mead. What did I have in mind when I "exhorted" you? I've completely forgotten. ;-)

Thanks for the link, though, and the change of scenery. I was gratified on your behalf to read Rich's review in the Oregonian. I would have loved to see the show, but I believe it's sold out, yes?

I thought the machine gun hidden in Tiny Tim's cane was an especially nice touch, but just the technical execution of the Scrooge decapitation and subsequent revolution scene....

Well, I better stop. Don't want to give anything away.

I know! And it surprised all of us that Rich failed to pick up on the obvious post-Bush parallels, but...one does what one can.

The show WAS sold out, amazingly, but a couple of new performance dates have been added. Let me know if you want to go, but just pleasepleaseplease, don't go on my account. Only go if it just isn't Christmas for you till you've been less by Tiny Tim.