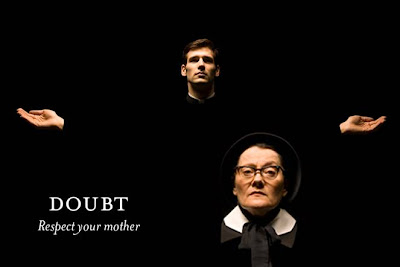 Tonight Doubt opens at PCS, and I can't wait for magic time, as Moss Hart described it -- you know, that moment when the lights go down and you know the play is about to begin. I've seen the play several times now, between run-throughs and previews, and I still eagerly anticipate tonight's performance. Yes, the cast is that good, for one thing, and Rose Riordan's direction is taut, yet surprisingly wry. This is John Patrick Shanley's masterpiece.

There's also the tart, pointed wit of the central character, Sister Aloysius, played by Jayne Taini, who has morphed her lovely features into an apple doll of a figure. But she is an apple doll with teeth. Don't miss this suspenseful drama. You don't have to be Catholic to appreciate the play, but if you are or ever were, you'll be treated to an extra dash of schadenfreude just watching the clergy square off.
Posted by Mead at 5/23/2008 09:46:00 AM

Email ThisBlogThis!Share to TwitterShare to FacebookShare to Pinterest
Labels: Doubt, PCS at The Armory, Rose Riordan

Magic time is Moss Hart? I thought I'd nabbed it from The Electric Company.

TEC only steals from the best.

And thank you, Giuseppe! The opening went very well. This production is definitely one of my prouder moments at PCS. Not that it had anything to do with me! Rose and her dazzling cast make this the superb effort it is -- and of course Shanley's script. In the past I haven't been a huge fan of his work, but this play is as lean and mean as it gets.