YAH! This July is JAW's 10th birthday. We’ll have a full schedule for JAW 2008 soon, but meanwhile I’ve just got to announce the five workshop pieces. Yep, we’re growing from four workshops to five this year, since we're putting a music theater piece into the mix for the first time.

And by the way: we are doing the Studio series of Oregon writers again this year, which I’ll announce here as soon as all three writers confirm. So stay tuned. Meanwhile, here are the “upstairs” readings: 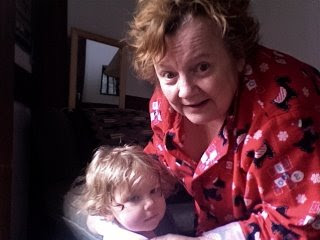 That’s Connie gracing this post, along with her granddaughter, Cora. Connie’s a real luminary in the playwriting universe, shedding light into corners I didn’t even know were dark. I’m really excited she’ll be here with us at JAW, especially with this hilarious and troubling and totally Congdonesque script. It concerns Jane, a rising star in the fractious world of academic feminism, who arrives at a new teaching post with her semi-senile mother in tow. But an unforeseen event has a ripple effect that forces everyone to improvise -- her mother must come out of her fog as an uneducated drifter starts impersonating Jane on the lecture circuit. We disagree here about whether the ending is ultimately bleak or hopeful, so come down and see the reading and let us know what you think.

A Brief Narrative of an Extraordinary Birth of Rabbits
by Colin Denby Swanson
No two plays of Colin’s are alike. A few years ago I was fortunate to see her eerie, otherworldly Death of a Cat when it premiered at Salvage Vanguard Theater in Austin, and I was bowled over by the play’s effect on the audience. Well, this new play could not be more different in tone and style. For now I’ll just tell you that a cynically humorous stork narrates this story about a woman who can’t seem to stop giving birth—to bunnies.

Pony
by Sally Oswald
When we present this reading at JAW, some people are going to be baffled by the play’s characters. Others in the audience will know exactly who the characters are. Pony uses the classic play Woyzeck as a point of departure, effectively beginning where Buchner’s story ends. Along the way, gender lines merge, twist and double back in this tale of six souls in search of identify. It’s extraordinary writing by a powerful new voice in American theater.


Enchantment
by Carson Kreitzer
Carson’s scripts often start with “found” texts that she weaves verbatim into original dramatic narratives. No mere documentaries, she places disparate dialogues cheek by jowl so that the sum is impactful beyond any one of the original sources. In Enchantment, Carson brings us the words of Temple Grandin, a highly functional autistic writer and thinker, and the writings of Bruno Bettelheim, most well-known for The Uses of Enchantment, famous for its analyses of fairy tales.

Crazy Enough
by Storm Large
Drawn from Storm’s life and music, this one-woman show will get its world premiere next season at PCS, and JAW’s audiences will play a major part in shaping what it will become. Storm is currently working on the text, and what I’ve read so far is bracingly frank and revealing in a way that only a natural born storyteller can put across.

Officially switching the cassette tape in my pink boom box to "I'm So Excited" by the Pointer Sisters.

sounds great! Wish i could make it!

The women strike back! Don't know if I'll be in Portland mid-July (may have moved somewhere else on the West Coast by then), but you can bet I'll be a JAW junkie if I'm around!