Greetings from the Heartland, Part One

Go Hawkeyes and whatnot! I’m here at the annual New Plays Festival produced by the School of Theater at the U of I in Iowa City, where I’ve been since last Sunday, so it’s high time I told you what I’m seeing here.

This is the third time the School has honored me by inviting me to this fabulous festival of work by the MFA theater students. Playwrights are the focus, but director, dramaturgs, designers and many others are also contributing to the event, and their enthusiasm for this week is better than a triple shot of Foglifter Espresso.

The Festival a heady mix of aesthetic styles and philosophies, and I’ve always found it’s a prescient time; these writers are the next wave of plays moving into the American repertoire, after all, and historically these writers have been a great source of future collaborator for me. David Adjmi, Allison Moore and Kirsten Greenidge are all writers I met here for the first time, to name only a few.

So imagine my anticipation. And I’m glad to say we got off to a good start with a reading of Tony Meneses’ remarkable new play Bajo Agua. Tony also directed, assisted nimbly by dramaturg Kate Stopa. Reminiscent of some of Anouilh’s frothier plays, Act 1 is a lighter-than-air dream state in which a trouserless groom-to-be (played Rick Garcia, he of the movie star good looks) wakes up in a room next to a fiancée he doesn’t remember. Act 2 ventures into deeper waters, figuratively and literally, as we learn about the fiancée’s own fugue states and also why the groom was so deep asleep in the first place.

All this took place in a large lab space – a narrow yet cavernous space tank well-suited to the play’s sense of spiritual submergence. For that evening’s offering, we moved to a full production in a largish theater space with a three-quarter thrust config. The Toymaker’s War, written by Canadian playwright Jennifer Fawcett and directed by Bruce Brandon, is clearly a work in progress, but one with great promise. In scenes that shift between present-day Montreal and the Bosnia of 1995, the script is a taut examination of journalistic integrity at the breaking point. Ms. Fawcett can write, and I expect we'll be seeing much more from her. 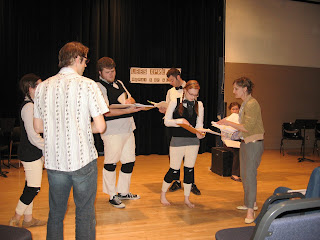 The next day we were treated to a theatrical epiphany entitled Why LOVE Doesn’t Recognize Its Name, written by Lisa Leaverton and directed by John Kaufmann. (Above is a rehearsal photo; John is in the foreground, Lisa’s at the far right.) The action revolves around a shop called Lee’s Expressive, where Lee and his staff (the “Mechanics of Expression”) strive to help clients whose speech patterns are clogged with words that are too ornate, or have the wrong shade of meaning, or just plain don’t communicate. Since the Mechanics sometimes get stuck themselves, they occasionally have recourse to Deep Mystery – the audience – whom they consult to get the perfect spare part, meaning a word or phrase that will be strikingly apt.

Part scripted play and part free-form event, it was deliriously fun for the audience of about 50 to be cast as Deep Mystery, especially when feeding words to a Mechanic so drunk on language and its potential that we fall in love with her. The message she ultimately synthesizes from Deep Mystery’s mutterings was surprisingly moving to me. William Burroughs and Laurie Anderson used to say that language is a virus; this play brings us to the realization that as powerful as human speech is, it functions best when it transcends itself.

That last piece sounds completely delicious! And thank you for putting these writers on my radar.

You're most welcome, MM, and more to come! Meanwhile, congratulations on a very successful PPF. The NYT reviewer sounds extremely impressed with Amy Freed's new opus -- can't wait to read it.

You are in Iowa City... I love Iowa City. There are the best used record stores and bookstores there. Well, there was 20+ years ago.... I wonder if The Library is still there. It was a bar just off campus... ohhh... I'm having a flashback...er a memory. have fun!

You know, I haven't seen The Library this year. I know it was here during my previous sojourn of 2001. You'll be glad to know The Sancturary still's going strong and serving "alligator eggs" (which, amusing enough to at least of this blog's visitors)are known as POPPERS. No, they are!

Prairie Lights is still fabulous, and there are many used book stores. But now there are serious restaurants, too, including one (The Motley Cow) that could cut the mustard even in Portland's outgrageously high food-as-theater standards.