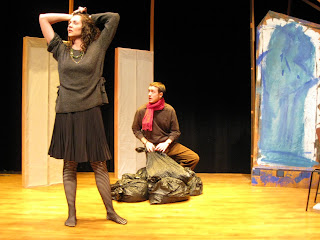 According to Art Borreca, who runs the Playwrights Workshop and is my colleague of old from the New Haven Canning Factory, the group of Festival respondents is one of the best they’ve had in a long time. Sure, he may say that to every group every year, but personally I’m very fond of us. There’s the legendary Morgan Jenness, the only person ever to win an Obie for her dramaturgical contributions; there’s John Eisner of the Lark, tall and lanky and looking to my mind like a French revolutionary (sans culottes, of course). Wendy Goldberg has somehow managed to be away from the O’Neill long enough to be here, and the downright glamorous Regina Taylor has a perspective all her own to offer. I’m loving hanging out with them here in Ioway.

And Festival madness has continued non-stop. Wednesday's production was Greg Machlin’s A History of Bad Ideas (pictured above), directed by Joe Luis Cedillo. It took place in yet another theater space in the School – this one with a steeply raked seating area that gave me the impression of looking down into a well. That was perfect for Greg’s play, which takes place entirely in the cramped living quarters of a struggling writer and his charming but damaged girlfriend, who duke it out for the upper hand. Sweetly sad and affecting, the play was clearly a fave with the audience.

Thursday we returned to the studio space to a reading of Sheela Kangal’s smart, edgy play about a family divided against itself, for which religion is the family business. The House of Grateful shows that Sheela has a wicked ear for the sort of relations where people have learned how to twist the knife in as few words as possible from years of practice. On each other. I’m looking very forward to the next draft of this work in progress.

Yesterday (Friday) we were treated to Joshua Casteel’s drama about another religious family and its destructive secrets, Mourning Aletheia. As though tapping into the national playwriting zeitgeist, Joshua’s writing……dares to be realistic! There, I’ve said it! Realistic! Though Joshua says this play actually isn’t representative of most of his writing, it did remind me that there’s a remarkable shift going on nowadays – plays being written again in a style reminiscent of Tennessee Williams, for instance (who did time here at the University long, long ago), or even Inge. But with a difference, of course, since writers have been upping the ante for decades now…..

Friday evening we were treated to a taut, eerie, austere new play by Mary Hamilton, We Three (deftly directed again by John Kaufmann). Because the play has two startling reversals I won’t spoil the plot for you – since I am sure theaters will be producing this play – I’ll just say that this script is just a few refinements shy of readiness for main stage performances.

Today we heard a reading of Joe Luis Cedillo’s play, Painted Skin, an extremely ambitious and metaphor-rich piece that was a finalist for the Bay Area Playwrights Festival last year. And the Festival came to climax this evening with a wild piece of Americana by Morgan Sheehan-Bubla entitled Dust Town. Directed by Anthony Nelson, the play uses a storytelling motif to present a pair of contrasting fables: in the first, a women succumbs to temptation and is destroyed by it, whereas in the second a strong female character throws off her shackles (literal and figurative) to triumph over despair.

Thunder and rain serve as aural integument in the play, and tonight, conveniently enough, we finally finally got the rain I’ve been missing since my arrival seven days ago. Talk about web-footed Oregonian -- I have to laugh at how I exulted tonight, walking to the theater alongside the Iowa River, which was glassy and speckled from all the raindrops pouring down on it.

It’s still pouring, Which nakes me miss Oregon something TURRible, as they might have said in tonight’s play. Or as one of my childhood crushes, Wednesday Addams, used to say: “It’s so nice and gloomy.”
Posted by Mead at 5/10/2008 10:01:00 PM

Any reaction to 7 Dreams of Her?

Damnation! How could I have left out mention of such a striking play? Well, these posts were devised in the dead of the night with a WWF Smackdown broadcasting in the background for company. Sorry! I've tried to remedy the oversight with the newest post.