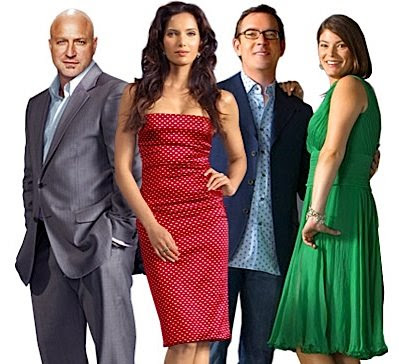 As we all know, you can’t come home from a night out and go straight to bed. And this was never truer for me than during Fertile Ground. There were so many improving ways I might’ve destressed after all those days of early calls and late, late nights. Like start reading the barely portable book Nancy Keystone gave me, Art & Physics, by Leonard Shlain. Or list to Couperin’s Mysterious Barricades, a harpsichord album that has yet to leave its jewel case. Or even catch up with what Wonkette has to say about Obama’s waning hopes for biparistanship.

But no. What did I do instead? Watch TV till I couldn’t keep my eyes open. Which typically that didn’t take long. To borrow a quaint vernacular phrase from the 80s: it was like dropping a couple of ludes. Take a look.

Top Chef. Between the lithesome Padma Lakshmi, and the Darth Vader of cultural cognoscenti Tom Colicchio, this take-no-survivors competition has a no-nonsense tude that I wish other “reality” shows would emulate. Favorite weekly moment: the gong that always sounds as the contestants up for elimination face the judges.

Mamma Mia. Rarely do you get to see movie starts willingly put themselves in a situation where they clearly have no idea what they’re doing. The whole giggly, frothy mess looks like karaoke night at ChopStix. Can’t say I was entertained, but neither I could stop gaping at it.

Transsiberian. Ordinarily I don’t watch action-adventures movies (can’t abide suspense even in the trailers, let alone the actual movies), but I wanted to relive happy memories of my own Siberian adventure of two winters ago. Yep, it brought back the countryside I remember. Except I wasn’t chased across it by Ben Kingsley.

Damages. Is anyone watching this Glenn Close vehicle on F/X? Never mind that the plot is crawling with red herrings. It’s great fun to see legal eagle Patty Hewes be mean to her associates, and there’s at least one outrageous double-cross per episode. Catch it before it jumps the shark, though; there are already signs that the story line plans to recuperate Close’s character by showing up that she’s not as bad as we were led to believe. At the end of the first season, it appears that she hired an assassin to get rid of an underling who was becoming inconvenient – talk about the boss from hell! But now…let’s just say this season co-starts Timothy Olyphant as the boy next door you KNOW is going to turn out to be bad bad bad. K?

I am a Top Chef whore. VERY pleased with final four FYI.

And I have not seen Damages - but I should. Glenn Close has always been my favorite drag queen. (truthfully she is one of my faves, but no one does over-the-top better).

I love Mama Mia. And it's a pretty awful movie. And I love it. Lordy.