ACTOR: You must come see me in my new show.

CRONY: When do you close?

It’s a semi-joke, anyway, and it’s on me. I’m as bad as every other theater person, always waiting to the last minute to see plays. It’s a bad habit, because I’ve often wished too late I could see a show twice. Yet here I am, up to my old tricks, recommending shows to you at Hour 11.75.

Portland Opera’s Turn of the Screw is now history, in fact, but I want to record what a transcendent experience it was. Britten’s music still seems as fresh as when he first wrote it, starting out with bright notes glancing all over the place that turn darkly fulsome in due course. I love this piece because it’s a rare opera that works as theater. And it stays much closer to Henry James than the movie version of the book, The Innocents (which is fabulous for different reasons). In Britten’s version (libretto by Myfanwy Piper), you have to ask yourself: are there really ghosts haunting the children? Or are the children actually bedeviled by a tweaky, sex-starved caretaker on the verge of mania?

At this writing, you’ve still got three hours to get over to Profile Theatre Project and see Neil Simon’s Biloxi Blues, in an excellent production directed by Pat Patton. Yes, I know. Neil. But BB is one of Simon’s best; it’s far less self-congratulatory than his other autobiographical works. The reason to go, though, in addition to the taut direction and the cleverly designed set (by Tal Sanders), is the seamless ensemble performance. What a cast—terrific across the board, though I have to single out a young actor named Alec Wilson, who plays Eugene, the stand-in role for the playwright. His earnest, self-deprecating and effortlessly warm portrayal makes him the young man that every guy hopes he was at that age. 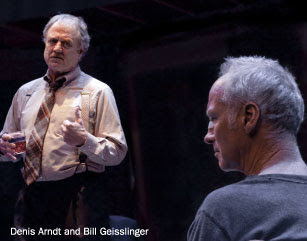 Also playing in a few hours, and again at 7:30 for its closing performance, is ART's must-see powerhouse The Seafarer, by Irish sleeper Conor McPherson. This playwright is often compared to his countryman Martin McDonagh, and unfairly; the McPherson has a well-observed fascination with the apparently ordinary, to which he adds an ear for the eerie that turns naturalism inside out. (Not to ding McDonagh for something he doesn’t aspire to, though. But that’s another post.)

This is Allen Nause’s best directing to date (since I’ve been around, anyway), and the entire cast is outstanding, especially Bill Geissinger as a man who commits the worst deadly sin of all: despair. He believes his soul is so utterly lost that not even God can save him.

Not that the play’s a dirge – far from it! There’s a twist to the play that not even this jaded old structuralist saw coming. You won’t, either. Two more performances – get your butt over to ART, or wonder forever what all the fuss was about.
Posted by Mead at 2/15/2009 11:17:00 AM

hi m,
god i love mr. arndt. just had to say it aloud. saw him in pillowman when i was up at ACT, and holy jesus fuck. the man's brilliant.

who knew i had such a strong opinion? ;0

just got a chance to go see mabou mines' DollHouse in brooklyn next week. so i'm going. meantime, am running a lot and singing a lot while here in nyc.

thinking of you, and sending love,
x

O Madame X, I envy you. I've seen just a few minutes of MM's Doll House on video, and even that brief excerpt was brilliant. Can we count on you for an account of the production once you get back?

This post gave me a guilt complex. I think I pulled a "When does it close?" on BB.