Her Journey, Her Meaning 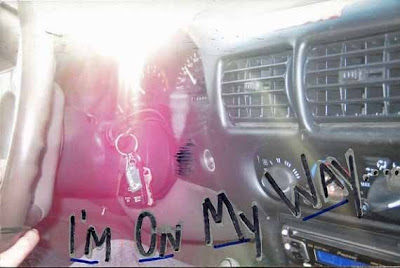 People like to tar blogaholics like me with the brush of voyeurism. But really that’s a big ole misnomer. There’s a bazillion of us fool enough to put aspects of our lives on display; it is still voyeuristic when the peepers are invited in to comment?

Preferable by far to think of it the blogosphere as a place to connect with others, or at the very least to feel an unacknowledged kinship with them. There are several people on the astral plane to whom I’ve never said as much as Доброе утро, but I enjoy being part of their lives, whether they know it or not.

Miranda Monroe is one such silent partner for me, or rather I am for her. This young lady caused a ripple in the force a few months ago on PostSecret, when her postcard announced that she – a 24-year-old “tattooed weirdo with a passion for animals” -- was forsaking life in Rochester, NY for a new life and an unknown fate in Portland, OR. Why Portland? “Google seems to think I belong there.”

Google and I concur. She’ll fit right in.

As an inked Mary Tyler Moore for the new millennium, the response to Miranda’s announcement was huge, and she responded in kind by creating a blog to chart her progress. For a while there was an anticlimactic series of weeks devoted to the young lady’s prep time – slimming down possessions, dealing with the reactions of friends. But we also learned more about her: her struggles with PCOS, her series of abusive boyfriends, and other patterns she hopes will not follow her to Portland.

Now the countdown to her departure is underway, and Miranda’s 304 followers are looking forward to welcoming here – perhaps in person, just think of that – to the land of a thousand coffee shops.

Holy Blogrolls, Batman. I am an avid follower of Postsecret. How did I miss this one? Sheesh. Sleepwalking, I guess.

Best wishes to Miranda as she writes her Tales of Ecotopia.

I also have this memory.