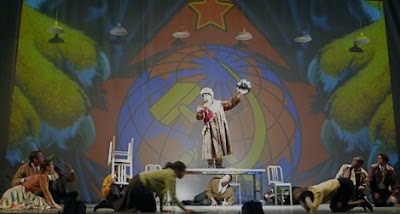 Heavens be praised, opening night of Apollo was the soaring experience we all hoped it would be. (The photo above, by Valerie Spencer, is from the Sputnik section in Part 1.) Yes, the show's a marathon, clocking in at this point at 3.5 hours of playing time; yes, it is sometimes frustratingly (though, we hope, purposefully) repetitious. But the consensus is that it’s a visual and aural feast, a great ride, and worth expedition when it arrives at its profoundly moving conclusion.

Not everybody agrees, of course. During the previews this past week, we invited opinions, either through the questionnaires we passed out or via emails to literary@pcs.org. In addition, as always, various members of the artistic staff have been hailed and assailed through phone calls as well as by email. Friday – the morning after the final preview – I was cc’d on an ecstatic email from a teacher who urged her colleagues all over the county to work with us to make sure their students see the production during its brief (three-week) run. That same morning, Chris Coleman got an email from a patron who accused him of mounting the whole thing just to irk her personally.

Make up your own mind. Don’t miss this singular event, the linchpin production of the Fertile Ground Festival. And bear in mind that tonight, the twittering, chittering, chatteringnattering virtual community is invited to sit in the balcony and comment on the production while it’s in progress. I’m seeing Fat Pig tonight, but as soon as I can rush back home and fire up Twitter I’ll be participating in the colloquium, too.

Congratulations -- you've just won the Premios Dardo Award. To find out what it is, either open your front door and look for Ed McMahan or check out:

Congrats, and pass it along!

Bob, I was accepting the Premio Dardo even as you were leaving this post. Thank you very much, I'm honored. And WATCH THIS SPACE: I will soon crow over the distinction and lord it over my colleagues!