Yet again I ax you to forgive me for my neglect. It’s been blustery and flustery at stately Wayne Manor recently, with How To Disappear and Never Be Found rehearsing (and thus Rose is MIA), Apollo in previews and Fertile Ground already on the simmer. Yikes! By the way, for a handy blog item that manages to encompass all the above, check out The Mighty Cannon’s recent musings at Culture Shock. The mystery man is really on a roll, a tear, a wild, wild ride........ 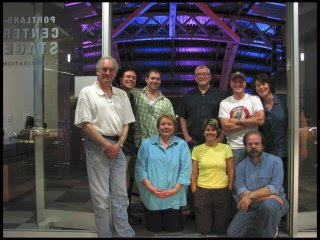 In the midst of all that the excitement (and let’s face it, stress = stress, even if you are having fun whilst undergoing it), an ongoing oasis for me is always PlayGroup, PCS's writers' unit. Yeah, that’s the gang at right. Our bimonthly meetings are elemental for me – touchstones where I’m reminded that it’s great playwriting that makes all the rest of the madness worthwhile.

As you know, because you never miss a post here, a week ago Monday we hosted a public reading of Patrick Wohlmut’s new play Continuum, the group’s Sloan commission. The omnipresent Barry Johnson, of Oregonian and Art Scatter fame, spoke to Patrick and I in advance of the reading – a conversation I wish could have gone on for much longer. But now Barry’s recorded his impressions of that conversation as one of the inaugural entries on his new column, Portland Arts Watch. You now have to scroll down to January 11, that’s how remiss I’ve been as of late, but if you do you will be rewarded with finding out all about us.

And now for a preview of coming PlayGroup exploits, plucked from the official Fertile Ground calendar:

The Orchard by Althea Hukari
Directed by Olga Sanchez

Chekhov comes to Hood River in this large-cast, ensemble comedy-drama, with echoes of The Cherry Orchard and The Three Sisters, about a Finnish-American family in transition. Ms. Hukari is a founding member of PlayGroup, Portland Center Stage's celebrated playwriting unit.

For this group show created by PlayGroup (whose previous escapades include The Clearing, Frenching the Bones and Ten Tiny Playlets) and directed by Matt Zrebski, each playwright pulled a Portland location and a cast size out of hat, then went to work on a short play inspired by those circumstances. The result, presented in rehearsed concert form, is a kaleidoscopic vision of the Rose City that adds up to a town we all recognize.

PLUS
A Fully Staged World Premiere

[ Not a PlayGroup event, but Shelly is a beloved PlayGroup member]

New York, 1920. The Great War is over, and people are hungry to live and laugh again. Nobody laughed more than the "Algonquin Round Table", a group of writers and their friends who gathered at the Algonquin Hotel. During the course of their "ten-year lunch," Table associates Alexander Wolcott, Robert Benchley, Dorothy Parker, George S. Kaufman, Edna Ferber, Heywood Broun, Harold Ross, Harpo Marx and Jane Grant gained fame and fortune as much for their widely quoted bon mots as for their significant achievements. This stage play, which premiered at Lakewood Theater Company and won an Oregon Book Award, has been completely rewritten as a musical in collaboration with Dave Frishberg, one of the nation's foremost Jazz composers (and a Portland Native).